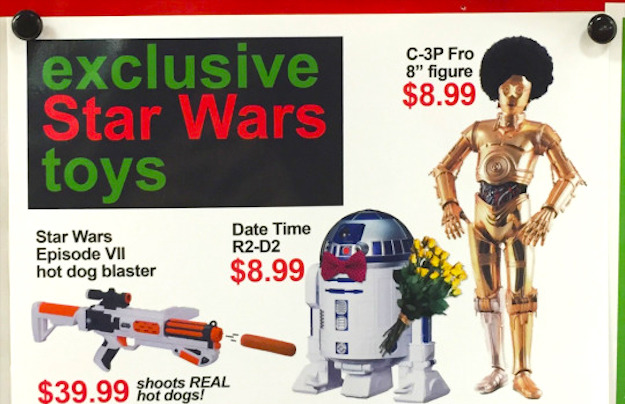 Black Friday has come and gone and Cyber Monday is already on a year-long hiatus. Suffice it to say, the last few days have been exciting and exhausting for both retailers and consumers, with amazing deals to be found on items as far-ranging as HDTVs to quadcopters.

DON’T MISS: 10 glaring mistakes you might have missed while watching the Star Wars prequels

At the same time, being inundated with incredible sales coming from every which way — TV, print media, online, email blasts — can also be overwhelming. After all, when everything is on sale, it can sometimes be hard to discern what’s truly on sale and what’s really a great deal.

That being the case, and with Cyber Monday now out the door, we thought we’d have some Black Friday fun and direct your attention to some hilariously crafted fake Black Friday ads that we wish were real. Originally posted on Jeff Wysaski’s Obvious Plant tumblr blog, some of these really capture the absurdity of some Black Friday sales while others are simply absurd for the sake of being absurd. Regardless, some of these are really great.

First up, we have the classic ‘gift’s they’ll only use once’ collection, complete with a bevy of health-oriented items.

Next, we have an incredible Air Bud bundle pack. I mean, who needs Netflix when you can get 87 DVDs for just $149? Physical media lives.

We don’t want to spoil every spoof ad Wysaski’s managed to come up with, so make sure to hit the source link below to see all of his creative gems.

Notably, this isn’t the first time we’ve seen the brilliance of Wysaki’s comedic sensibilities hit the web. For instance, he ran a similarly funny campaign comprised of fake Halloween costume ideas just last month. This one in particular — a man stuck at a mall with his wife — is pretty great.