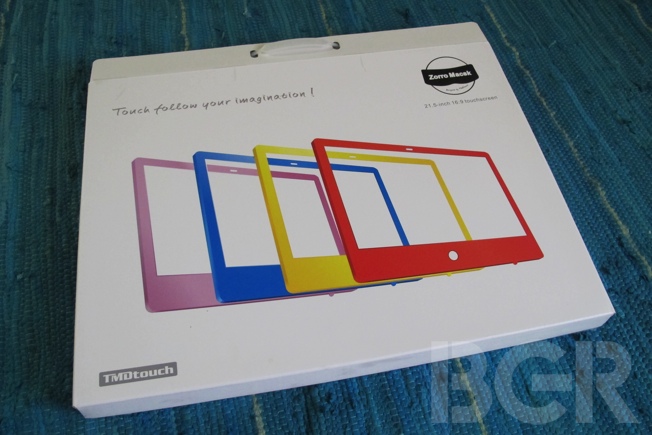 Steve Jobs once said that touchscreen Macs wouldn’t make any sense because your arm would quickly become fatigued from holding it up in the air to poke the screen. So when Chinese company TMDTouch revealed its Zorro Macsk (that’s not a typo) that claimed to be capable of adding multitouch gestures to an iMac with mere plug and play functionality, my interest was piqued. Rather than add a touchscreen panel on top of the iMac, the Zorro Macsk uses infrared technology to track finger input. But does the $199 USB-powered accessory give the iMac a new lease on life? Read on for my full review.

Before we begin, it’s important to note that the Zorro Macsk only works with 21.5-inch iMacs and not 27-inch models. With that in mind, I unboxed the Zorro Macsk and was surprised to find more than just the cover inside of the package. Included inside is a screen protector for the iMac and an aluminum stylus. The actual Zorro Macsk itself is not very heavy and clips onto any 21.5-inch iMac via magnets. After the frame — it doesn’t actually have any plastic screen on it — is attached to the iMac, completing the setup is as easy as plugging in the attached USB port. Then in about 10 seconds, the Zorro Macsk’s calibration will be complete and you should be able to touch, pinch and zoom, swipe and scroll on your iMac just like on an iPad or iPhone, right?

Not exactly. While TMDTouch would like you to believe that its Zorro Macsk add-on is as buttery smooth as any iOS device, real-world use is actually a hit and a miss, and that’s if it works properly.

To guide users on what can and can’t be done with the Zorro Macsk on, TMDTouch includes a handy instruction manual that lists all of the available gestures.

So what worked and what didn’t work? Simple gestures worked out of the box: tapping items with a single finger, double clicking items with a double tap and swiping a finger to select multiple items. The only thing that seemed to hardly ever work for single finger operation was the pressing and holding an element to toggle a right-click. Sometimes it worked and most of the time it didn’t work. And when the Zorro Macsk did recognize the long press, I was already frustrated at how long it was taking to do so.

In terms of two fingers, scrolling up and down pages, pinching and zooming and two finger rotation work as they do on iOS, although there is more resistance because you’re still basically touching your iMac’s display.

Where things go wrong for the Zorro Macsk is when you add three, four and five finger gestures. The infrared sensor appears unable to track up to five fingers properly without getting confused most of the time. A three-finger gesture swipe downward is supposed to minimize a window, but for some reason it could never do so while I was using my right hand. It was only when I used my left hand that it finally worked. A three-finger swipe up is supposed to maximize a window, but it would appear it actually toggles Full Screen mode, instead.

Then we have one hand or five-finger gestures. With all five-fingers grabbing the screen, the instructions say you can swipe left and right to switch between desktops. When this gesture works, it’s not a problem, but when you accidentally grab and click open windows instead of switching desktops, the Zorro Macsk’s limitations become clearly noticeable.

Even worse was that swiping up and down with five fingers to activate Mission Control and Exposé never worked. Neither did pinching my fingers in and spreading them out to activate Launchpad and display desktop work, either. I don’t know if that was a calibration problem or something, but multiple hard resets involving yanking the USB cable out and popping it back in didn’t resolve the issues.

Finally, the Zorro Macsk claims it scan recognize two hand gestures. Swiping up with ten fingers to display the desktop also didn’t function, but swiping down with all ten fingers to quit an open application worked perfectly.

In conclusion, the Zorro Macsk is, as you’d expect, a very novel peripheral. While it does provide iMac users with some limited forms of touch and gesture functionality, it’s hardly worth the $199, especially it can’t accurately track more advanced gestures. If you desire simple point and click features or maybe want to turn an iMac into a kiosk for an art project or small business, the Zorro Macsk might be worth considering. For everyone else, if you really must have a touchscreen desktop computer, I’d recommend getting one of the many upcoming Windows 8 all-in-one PCs. Those have real touchscreen panels and an operating system built for touch.

A quick demonstration of the Zorro Macsk follows below.