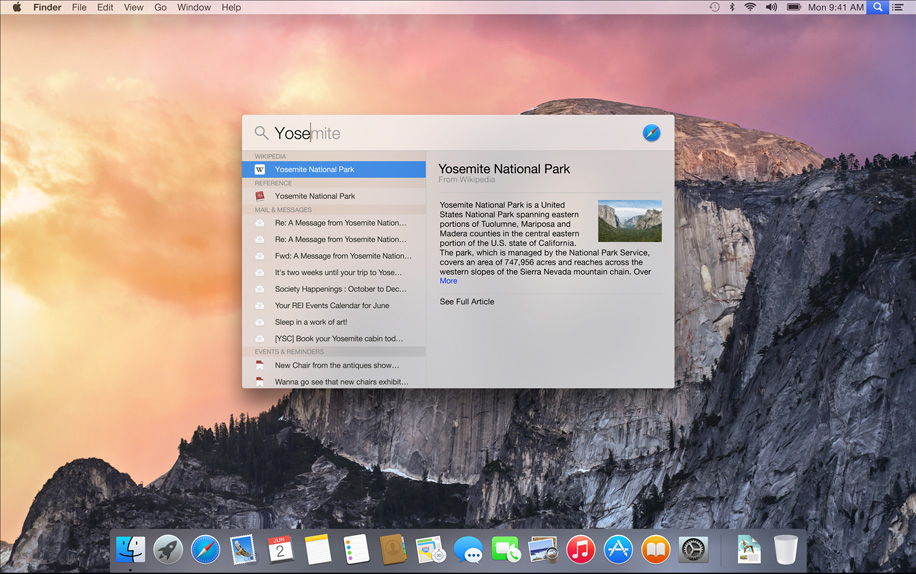 Apple on Monday took the wraps off OS X Yosemite and iOS 8, two major updates for its computers and mobile devices, that have plenty of interesting features to lure in customers. There’s one new Yosemite and iOS 8 feature that got easily overlooked and will be taken for granted each day once these operating systems are released. This new feature deserves to be acknowledged, as it’s a major update for Apple, especially considering the current state of this particular business: Apple’s completely new Spotlight search feature available on both OSes.

No, Apple did not release its own search engine, but it put a lot of effort into placing Spotlight front and center both on the Mac and also on the iPad and iPhone.

Apple already had a great search feature in place on OS X and iOS devices, but Spotlight can now do so much more for the user, while also indirectly hurting Google, which is currently Apple’s biggest rival.

In Yosemite, even though the Spotlight search icon is still located in the top right corner of the status bar, once activated it takes over the screen, getting a prime center position. But Apple has not just redesigned its OS X search tool, giving it an Alfred like persona, as it has improved it to offer user better search results.

Spotlight on Yosemite will retrieve files on the computer and show file previews, but also pull fast information from other sources, including the Internet, apps and other sources. And it will do so without the user having to think he or she needs to “Google” something.

Spotlight on Yosemite now pulls information from Wikipedia, displaying a quick snippet from an article, including a picture and a link to the full article, will display iTunes and App Store content complete with links to iTunes, and offer quick access to trending news, links to Apple’s Maps app, local events and movie schedules, and conversions.

All this Internet-related action happens without an intermediary – there’s no Bing or Google doing the job, even if Apple is relying on any of them for results, and even lists them in the description and images used to for Safari – and there are no ads that can be clicked to generate revenue.

The same Spotlight search engine is available inside Apple’s revamped Safari browser app for Yosemite, with Apple offering similar results inside the browser. Called a “more intelligent way to search,” Safari’s Spotlight Suggestions use Wikipedia, Bing, Maps, news and iTunes “along suggestions from your search engine.”

Apple has also significantly upgraded its search inside iOS 8, with its mobile Spotlight search getting more powers. Just like inside Yosemite, Spotlight on iOS 8 will deliver Wikipedia snippets, local news, quick access to apps installed on the device and apps from the App Store, iTunes content, movie showtimes, nearby places and websites. Spotlight search is available from any iOS home screen, and also powers search inside Safari for iOS 8.

Even more useful, Apple’s new search engine will be smart enough to allow users to search their photo galleries using certain parameters (such as time, location and album names), to quickly find the images they’re looking for.

Furthermore, Apple has also improved Siri, its virtual assistant, which may offer users always-on listening features – the “Hey,Siri” hotword has been confirmed – and will allow users to also purchase content from iTunes directly by voice.

For what it’s worth, Apple also plans to support DuckDuckGo searches on iOS devices, allowing users to select this particular search engine as the default one on iPhone and iPad.

Finally, Apple has also used search to make developers happy, promising them new search-based features that iOS users will be able to enjoy on iPhones and iPads, a move that should further help out with app discovery inside a massive store such as the App Store.

On top of delivering more in its search results inside Yosemite and iOS 8, Apple also wants to better protect the user’s privacy when online. With Safari, both the OS X and iOS versions, Apple has promised even more control over privacy, by letting users browse the web privately on a by-tab basis.

“So while you do your online banking privately in one window, your browsing history is still being saved while you surf in another,” the company writes on its website. “You can also now search the web using DuckDuckGo, a search engine that doesn’t track you.”

It’s very unlikely that Apple will go after Google, Microsoft or Yahoo, trying to steal a share from their respective search businesses. But the company is certainly interested in offering a great search experience across its devices, for everything a user could be looking for. Used in such manners on a regular basis, Spotlight will trigger new search-related habits for the user, which could help Apple push Google out of its products, whether they’re Macs or iOS devices.

“Last year Bing became the default web search for Siri, and will now also be the default web search provider in the redesigned Spotlight search feature for the next generation of iOS and OS X,” Bing’s director of search Stefan Weitz told Search Engine Land. “We’re excited about extending the Bing platform to help iOS and Mac customers find what they need to get things done.”

An image gallery showing Spotlight search screenshots from Yosemite and iOS 8, as posted by Apple, follows below.