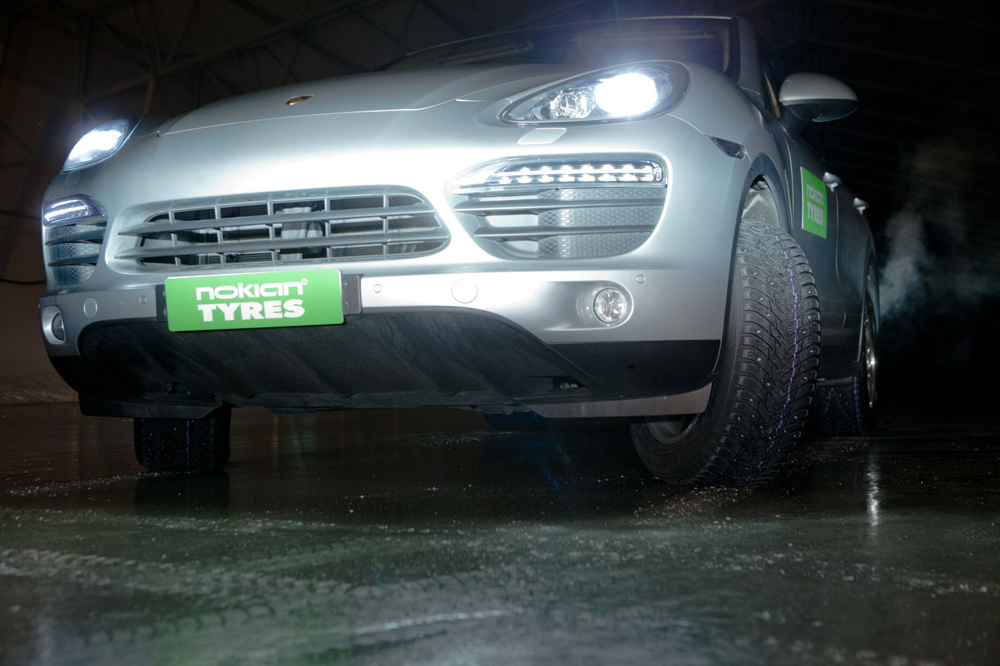 Anyone in the Northeastern United States right now (or anywhere else that might be getting hammered by snow) knows how much of a pain it can be to drive during and after a blizzard. There’s ice everywhere, mounds of snow to drive around or over, and you have to fight your way through it all while other drivers who are less careful slide around the roads. Winter tires can definitely help, but buying them and having them put on your car is a pricey proposition that many people don’t want to deal with or simply can’t afford.

But what if there was a better way?

Nokian Tyres — not to be confused with Nokia, which actually did manufacture car tires many decades ago — has developed a first-of-its-kind product that combines a standard tire with a studded winter tire.

Using a retractible stud mechanism, the tires’ studs can be deployed or concealed on demand, even while the vehicle is in motion. So, if a driver sees that he or she is approaching an ice patch, a quick tap of a button deploys the studs for maximum traction.

A few images and a video of the new tires follow below, as does Nokian’s full press release.

Unique stud technology brings the studs out when they are needed

Nokian Tyres presents the world’s first non-studded winter tyre with studs in connection with the 80th anniversary of the winter tyre. With this revolutionary concept tyre and its unique stud technology the inventor of the winter tyre gives a hint of the things to come in the future. With a press of a button, the driver can bring out the studs to improve the grip of the tyre. When the studs are not needed, they can be retracted back into the tyre.

The idea of the combined non-studded and studded tyre is that the driver can make the switch when the conditions clearly change. Studs are not used on dry roads and stable winter conditions, but they can be activated in icy weather for extreme safety.

The concept tyre of the world’s leading winter tyre specialist utilises the tread pattern and structural solutions of the newly introduced Nokian Hakkapeliitta 8 SUV studded winter tyre. The studs on all four tyres raise and lower at the same time. The body of the stud remains in place, and the moving part is the hard metal pin in the middle of the stud.

– This new concept tyre is an amazing technological feat. The unique stud concept may indeed become a reality one day. As the pioneers of the winter tyre world, we show that it is possible to combine a studded and non-studded winter tyre, says Matti Morri, Technical Customer Service Manager for Nokian Tyres.