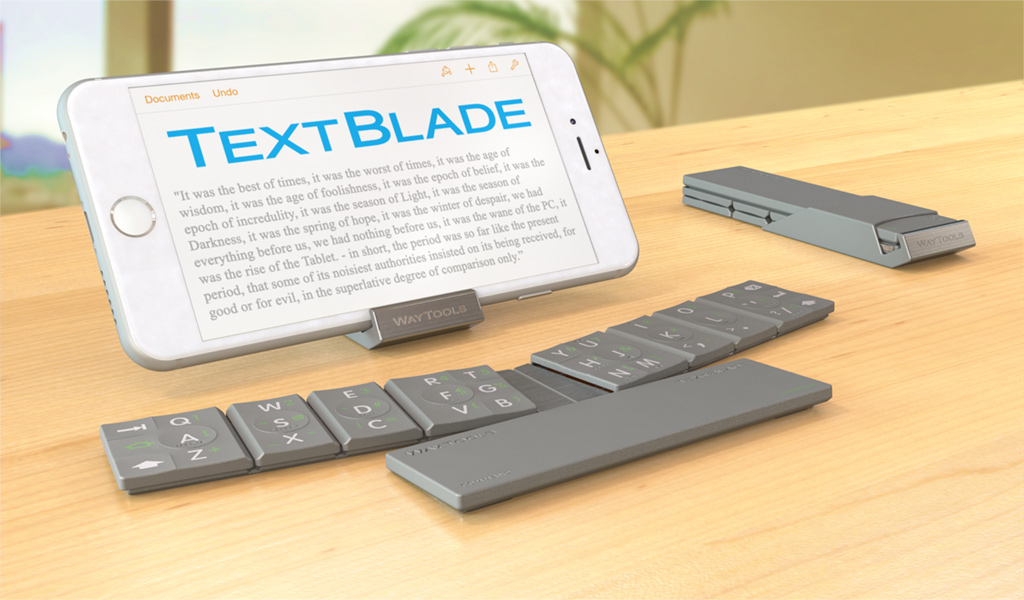 Typing on the iPhone 6 and iPhone 6 Plus is now a much better experience than it has been in the past, thanks largely to two main points. First, the screens on Apple’s latest iPhones are larger, which means the tap targets on the keyboard are bigger and easier to hit while typing quickly. Also, the software keyboard itself is much better in iOS 8 than it has ever been before.

But the simple fact of the matter is that typing on glass with no tactile response will never be as good an experience as typing on a real physical keyboard, but size and portability will always be an issue. That’s exactly why the new TextBlade keyboard from WayTools is so intriguing.

DON’T MISS: I saw the future

Announced on Tuesday to escape the clutter of a busy CES, the new TextBlade keyboard by WayTools is a novel and unique take on an iPhone keyboard accessory. The device consists of three components that connect magnetically, and a small charger that allows the keyboard to be plugged into any USB port.

The device’s small size is achieved thanks to a unique touch-typing system that allows as many as six unique buttons to be contained on a single key. It weighs just 1.5 ounces and will fit comfortably in any pocket.

The demo video created by WayTools shows exactly how this very cool typing system works, and you can watch the video right here:

“TextBlade is an entirely new class of device that delivers professional-grade, familiar touch typing to any platform – from iPhones to iPads to Android, without compromising the size or feel of the tablet,” WayTools CEO Mark Knighton said in a press release.

WayTools’ TextBlade keyboard retails for $99 and preorders are available right now. According to the company, it will begin shipping in February.