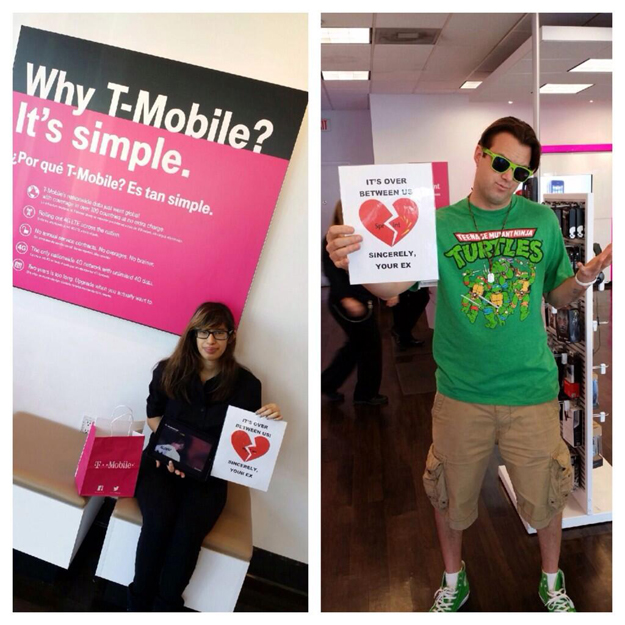 T-Mobile and its boisterous CEO John Legere love talking the talk, but they have also shown repeatedly in recent months that they can walk the walk. The scrappy nationwide wireless carrier added a jaw-dropping 4.4 million net new subscribers in 2013, including 869,000 net postpaid additions in the fourth quarter alone, and as a result it has larger rivals Verizon Wireless and AT&T chasing its various new initiatives. In the latest example that illustrates just how well Legere & Company’s various antics are working, the carrier said on Thursday that more than 80,000 people have participated in its recent “breakup letter” stunt.

“This is not just a promotion,” T-Mobile marketing boss Mike Sievert told Re/code. “What we are trying to do is bring an end to unfair one-way onerous contracts in this country.”

Following a recent press conference T-Mobile launched a new campaign that asks consumers to dump their various carriers and switch to T-Mobile, and to post a photo of themselves holding a breakup letter addressed to their old carrier. It also sweetened the pot with its “Uncarrier 4.0” offering, which pays early contract termination fees imposed by other carriers. According to Sievert, more than 80,000 such photos like the two above have been posted on various social networks thus far.

In light of the success the campaign has had thus far, T-Mobile said is is now widening its scope to include more than a dozen regional carriers customers can now switch from and qualify for a reimbursement of their early termination fees.

UPDATE: It looks like there was a bit of confusion. Re/Code’s article states that more than 80,000 breakup letter photos have been posted online “by customers who have left rivals for T-Mobile,” but that is not the case. BGR has confirmed with T-Mobile that Sievert’s 80,000 figure refers to the number of breakup letter photos posted across various social media sites, but it does not correlate with the number of people who left their carriers and switched to T-Mobile. This article has been updated to reflect that clarification.