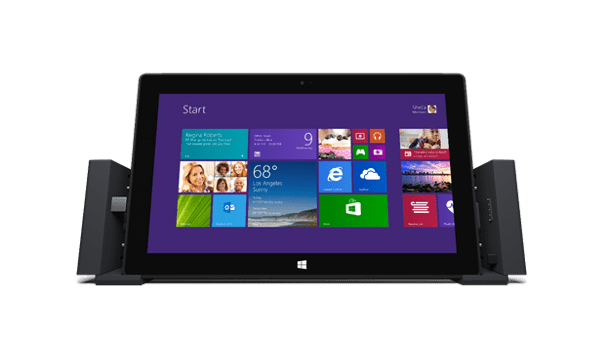 Although rumors and leaks might have spoiled the surprise, Microsoft officially uncovered the Surface Pro 2 on Monday, the follow up to its more powerful Surface Pro tablet. As the leaks suggested, the Surface Pro 2 will feature Windows 8.1, a Haswell-based Core i5 processor, 4GB or 8GB of RAM, a bigger battery, and an improved kickstand.

The new Surface Pro 2 will feature an HD display similar to the original, but with improved color reproduction. Dolby sound has also been added to the new Pro. According to Microsoft, the original Surface Pro was faster than 94% of the laptops on the market, but the Pro 2 will be 20% faster than the Pro — “lightning fast.” Graphic performance is also up 50% from its predecessor.

Microsoft also announced the Surface Docking Station for the Surface Pro 2. The Docking Station features 4 USB ports, Mini DisplayPort, Ethernet port, audio in and audio out. It can also support up to 3840 x 2160 resolution external displays. Continuing with accessories, Microsoft showed off the new Type Cover 2 and a multitude of available colors. Type Cover 2 will be exactly 1 millimeter thinner than the previous Type Cover, and is also backlit and completely silent. The Type Cover 2 will be released next year. Both the Surface Pro 2 and the Surface 2 will come bundled with “Best of Skype,” which allows for free international calling and free Skype Wi-Fi hotspot access for a year.