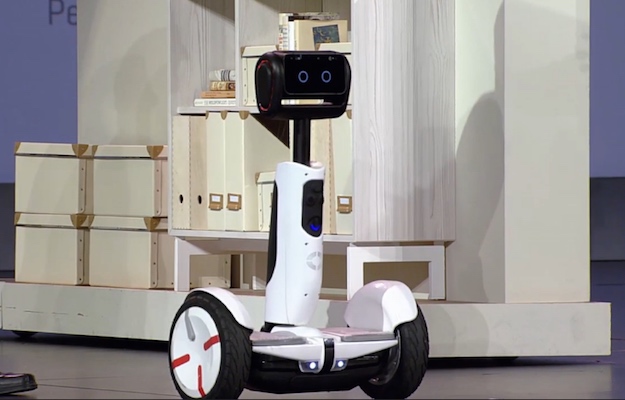 For decades, the Consumer Electronics Show, otherwise known as CES, was the place where we were able to get a glimpse into the future of technology. Since its inception in 1967, CES was often where the most innovative hardware companies across the globe would set up shop and dazzle attendees with new products and seemingly futuristic technologies.

But over the last 10 years or so, due to a variety of reasons, CES’ relevance has diminished substantially. These days, it’s hard to even properly frame the importance of the iconic trade show. While some years still yield a few interesting announcements, CES in its current form is far more likely to have you scratching your head than picking your jaw up off the floor.

CES 2016 thus far has been no exception, and no product reflects the trade show’s head-scratching spirit more appropriately than Segway and Intel’s new “personal transporter.”

Put simply, the device is a hoverboard designed to easily transform into a robot that can not only stream video, but also make facial expressions and an assortment of other gestures thanks to its digital blinking eyes and movable arms. The robot can also process basic commands, speak, and even follow you around the house if that’s your thing. In short, it’s a robot butler.

The future is here!

What’s more, the device even includes support for voice recognition, thereby preventing anyone from turning your own personal robot against you. It’s also worth noting that Segway’s robot butler can successfully navigate through a house filled with furniture thanks to Intel’s RealSense Camera technology.

Is this cool? Interesting? Ridiculous? Perhaps its all three, but with the bombardment of gadgets and gizmos we tend to see at CES, it’s sometimes hard to even tell.

One interesting use-case scenario explained during the presentation went as follows: say you’re home on the couch watching TV and someone shows up at your front door. Instead of getting up to see who it is, you can instead send your fancy robot butler in your place.

While the technology here seems cool, you might want to file this one away under “solutions to problems that don’t exist.”

In any event, this quirky robot butler is far more than a simple demo or proof of concept. Segway is planning to sell the device commercially and also issue a developer kit sometime during the second half of 2016.

You can check out a video of the contraption in action below.