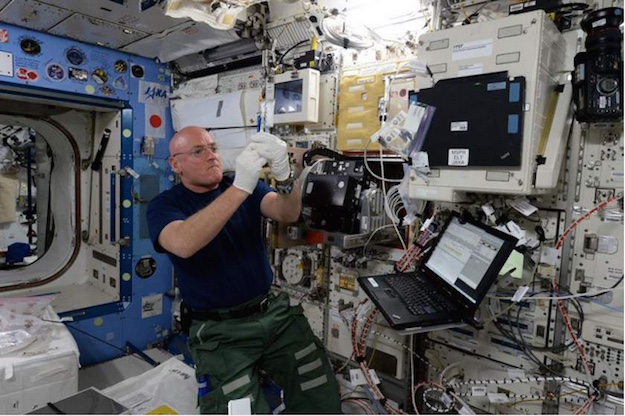 We’ve already explained how astronauts take showers in space, but what do they do when they’re not freshening up or, you know, engaged in important scientific research? Why, take selfies of course.

Now taking a selfie in space, in and of itself, is no big technical feat. But what makes an otherwise ordinary activity all the more interesting is that astronauts can use light emanating from different areas of earth to apply some makeshift filters to their photos.

Case in point: NASA astronaut Scott Kelly posted two selfie shots over the weekend, one of which was taken over a North African desert with the other being taken over the Mediterranean.

Both images show Kelly in the same area on the Space Station, looking down on Earth, but one thing is clearly different in both photos: the lighting. Kelly took one photo while over the bright whites and yellows of a North African desert and the other was shot just a few moments later above the blue Mediterranean Sea.

It’s too bad Kelly didn’t use the opportunity to make use of what would have been the most appropriate and coolest #nofilter hashtag ever.

Kelly, who went to space this past April, is slated to remain aboard the International Space Station for an entire year.