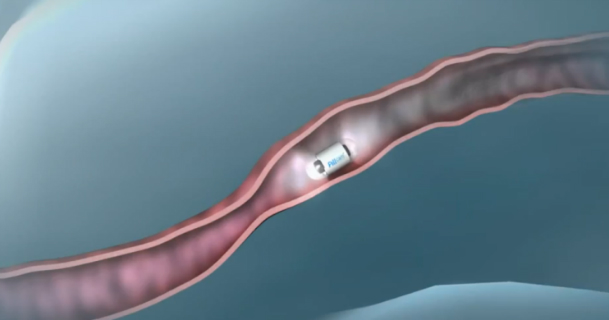 The FDA has approved a “bite-sized” camera-equipped smart pill for medical use in patients who aren’t able, for whatever reason, to have a complete colonoscopy, Mashable reports. The smart pill has a camera on both ends and will travel the human body in eight hours, taking high-speed pictures of intestines and sending them to a device worn by the patient. The doctor can then take a look at the pictures once the procedure is complete.

Developed by Israeli company Given Imaging, the PillCam costs $500, which is a lot cheaper than what a traditional colonoscopy would cost. However, the PillCam can’t, at least for now, completely replace invasive procedures, because it can’t offer the same kind of advanced imaging a colonoscopy delivers.

“I think that there’s going to be a real demand for this, and although they’re occasional cases, we look at this as a very good way to evaluate portions of the colon that we haven’t seen,” Douglas Rex, a doctor at Indiana University said.

The PillCam is not the only smart pill out there, but it’s already in use in more than 80 countries. Motorola’s Regina Dugan revealed last year that her department was working on a pill-like device could turn a person into a log-in password, allowing him or her to interact with various devices, although the exec did not elaborate on the product. Furthermore, the FDA has apparently met with other tech giants that are taking an interest in health-related features for their devices, including Apple and Google.

The following video shows how the PillCam is supposed to work.