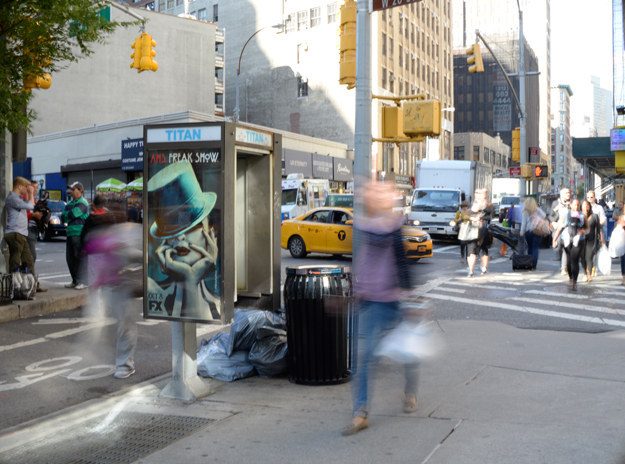 In addition to stadiums, malls, and other stores that deployed special Bluetooth-enabled beacons to track customers and provide special offers, promos and advertisements, public phone booths in New York City will also track users and push similar content to their devices in the future – BuzzFeed has learned.

Apparently, outdoor media company Titan, which already sells ad space in more than 5,000 panels in phone booths in the city, has deployed beacons in about 500 of them with consent from a city agency but “without any public notice, consultation, or approval.”

The city agreed to beacon deployment in 2013, and they were installed from September to November 2013. Titan told NYC’s Department of Information Technology and Telecommunications (DoITT) that the beacons will be used for maintenance purposes, hence a formal approval was not required.

Titan has installed beacons in other markets as well, but did not reveal in what cities. The company said that beacons in NYC are currently in testing, with Titan using them for “inventory management,” so it knows which panels are supposed to be replaced.

Once activated, such beacons could further track consumers for various commercial purposes. Apple has beacons of its own, the iBeacons, that can be used for advertising purposes.

BuzzFeed says that before being used to send out promo messages to smartphone users, the NYC beacons need to be paired with devices that have a certain app installed. Furthermore, users have to “opt-in” for notifications and data collection.

On the other hand, Titan acknowledged that some of Gimbal-made beacons were used for commercial purposes during the Tribeca Film Festival, even though they should only be used for internal testing. The company “stressed” that it received no data from the interactions.

Gimbal-powered apps that could integrate beacons functionality can also collect various data about the user, including location, time of day the user passed a beacon, and details about the hardware used. Gimbal’s privacy policy also says that such apps can collect data about website visits and app usage, although the browsing and app data isn’t sent to its servers.

The publication used an Android app to discover the active beacons in NYC. “On a 20-block stretch along Broadway and Sixth Avenue (from the bottom of Madison Square Park to just north of Bryant Park), BuzzFeed News identified 13 Titan-Gimbal beacons — or more than one, on average, every two blocks,” the publication writes.

Shortly after BuzzFeed’s investigative piece began to spread, Phil Walzak, a spokesperson for NYC Mayor Bill de Blasio told BuzzFeed that City Hall has requested for Titan to remove each and every one of its beacons from public phones in the city.

“The beacons will be removed over the coming days,” Walzak said, adding that “Titan has been an important City partner in helping expand communications options for New Yorkers, from piloting free public WiFi to providing free calling on all its payphones across the five boroughs for three weeks after Hurricane Sandy.”

Walzak claims that the beacons are incapable of collecting “any personally identifiable information,” but the city has decided to have them removed anyway.