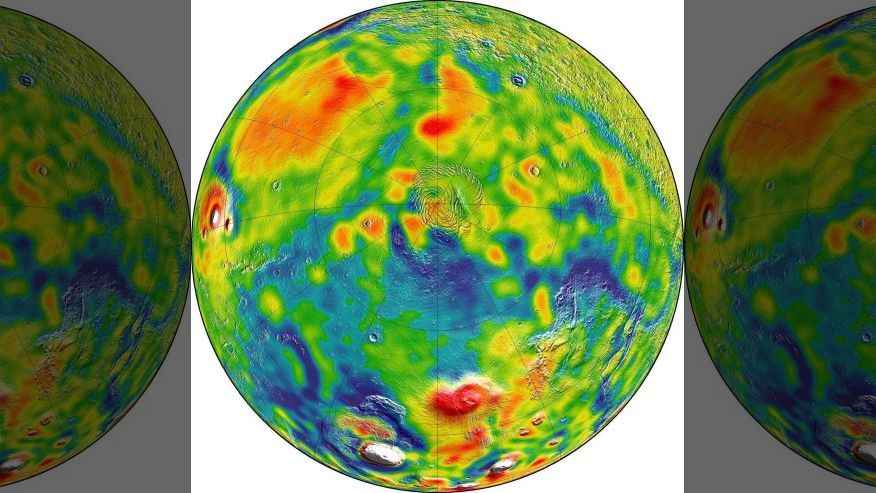 NASA has released an incredible Mars gravity map, based on data collected from three spacecraft.

“Gravity maps allow us to see inside a planet, just as a doctor uses an X-ray to see inside a patient,” said Antonio Genova of the Massachusetts Institute of Technology (MIT), Cambridge, Massachusetts, in a statement released by NASA. “The new gravity map will be helpful for future Mars exploration, because better knowledge of the planet’s gravity anomalies helps mission controllers insert spacecraft more precisely into orbit about Mars.”

Genova, who is based at NASA’s Goddard Space Flight Center in Greenbelt, Maryland, is lead author of a paper on the Mars Gravity research published in the Journal Icarus.  “The improved resolution of our gravity map will help us understand the still-mysterious formation of specific regions of the planet,” he added, in the NASA statement.

The map was created from data collected by NASA’s Mars Global Surveyor, Mars Odyssey and Mars Reconnaissance Orbiter spacecraft. “Like all planets, Mars is lumpy, which causes the gravitational pull felt by spacecraft in orbit around it to change,” explained NASA, in its statement. “For example, the pull will be a bit stronger over a mountain, and slightly weaker over a canyon.”

The space agency said that the resolution of the new gravity map could offer a new explanation for how some features formed across the boundary that divides the red planet’s relatively smooth northern lowlands from heavily cratered southern highlands.  Scientists also confirmed that Mars has a liquid outer core of molten rock by analyzing tides in the Martian crust and mantle caused by the gravitational pull of the sun and the two moons of Mars.

Mars looms ever larger in NASA’s future. The space agency recently announced a May 2018 launch for its delayed Mars Insight mission to study the red planet. NASA’s Mars Reconnaissance Orbiter celebrated 10 years at the red planet on March 10.

Related: Chaotic comet flyby blew away some of Mars’ atmosphere

Other space agencies are also eyeing Mars. The first mission of the joint European-Russian ExoMars program, for example, blasted off for the red planet earlier this month.