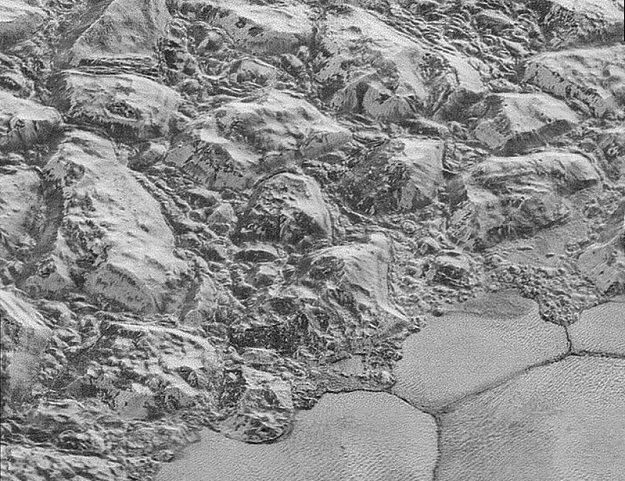 For anyone with even a passing interest in space and planetary exploration (okay fine, Pluto is not a planet), there’s a whole lot to get excited about this weekend. Early on Saturday, NASA released the most detailed photos we’ve ever seen of Pluto. The photos were originally taken by the New Horizons spacecraft which flew over the ‘dwarf planet‘ this past July.

“These latest pictures are part of a sequence taken near New Horizons’ closest approach to Pluto, with resolutions of about 250-280 feet (77-85 meters) per pixel – revealing features less than half the size of a city block on Pluto’s diverse surface,” NASA proudly explains. “In these new images, New Horizons captured a wide variety of cratered, mountainous and glacial terrains.”

Thankfully, NASA has compiled some of the sharpest, most interesting and mesmerizing photos from the New Horizons spacecraft into an easy-to-digest YouTube video. The resolution of the photos is sufficiently high as to reveal “features smaller than half a city block on Pluto’s diverse surface.” From vast mountains to glacial terrains, you’ve never seen Pluto quite like this.

As a point of interest, the photos themselves were taken at a range of about 10,000 miles from Pluto’s surface, an astounding feat given that Pluto lies a few billion miles away from Earth. You can check out the highest-res photos of Pluto over here.