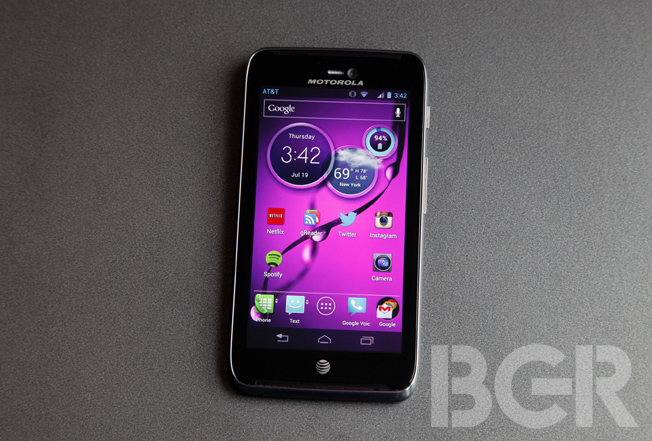 Years from now when people reflect on Android and its meteoric rise to the top, Google’s (GOOG) Motorola Mobility will absolutely be among the companies credited with pushing the Android platform to the next level during its early days. HTC (TPE:2498) lays claim to the first Android smartphone — the T-Mobile G1, or the HTC Dream as it was known internationally — but Motorola and Verizon Wireless (VZ) had the first Android-powered smash hit when they launched the Motorola DROID ahead of the holidays in 2009.

From the series of BGR exclusives to the cryptic “iDon’t” teaser commercial and on to the device’s launch, the DROID was the device that put Android on the map. The phone was billed as being everything Apple’s iPhone wasn’t — it had a physical QWERTY keypad, true multitasking, a 5-megapixel camera with a flash, widget support and more — and a massive marketing campaign coupled with the hype already surrounding the device sealed the deal.

Motorola Mobility has launched dozens of devices since the DROID hit Verizon in November 2009. Motorola’s contributions to the “DROID” family have been numerous, and other devices like the CHARM, BRAVO, Photon 4G, ATRIX, RAZR and XOOM-series tablets have attacked various markets at competitive price points. But even the RAZR, the eagerly anticipated Android phone that revived the iconic RAZR brand, was unable to generate the same amount of hype and success enjoyed by the DROID.

There are a number of reasons for the lukewarm responses Motorola’s various Android offerings have received for the most part, but one in particular seems to surface again and again: software.

Motorola’s DROID featured Android in its raw form, but Motorola knew it would have to distinguish itself from other emerging Android vendors if it hoped to see continued success with the open source mobile platform. Its repeated attempts at software differentiation were not well received, however, and Motorola’s various iterations of its custom “MOTOBLUR” user interface were often the focus of complaints among users.

Motorola is now owned by Google, which is a good thing for the struggling vendor, which never quite managed to turn a profit selling Android smartphones. The long-term impact this merger might have on other Android vendors like Samsung (005930KS), LG (066570KS), HTC (TPE:2498) and Sony (SNE) remains to be seen, but if the new ATRIX HD is any indication, Google’s acquisition is already having an impact on Motorola’s products.

In a nutshell, Motorola’s work with Android 4 Ice Cream Sandwich is a complete reversal from its earlier efforts with the OS.

Motorola still calls its user interface layer on top of Android MOTOBLUR, but this is far and away the most tame iteration of the company’s software. In fact, I’ll go as far as to say Motorola’s software tweaks actually enhance Android — and anyone who has used an early MOTOBLUR device knows just how crazy that sounds.

Android purists may find this hard to believe (I did, too) but Motorola did a wonderful job with Ice Cream Sandwich in a number of key areas.

For one thing, the UI is very nicely done. I like some of Motorola’s recent phones, most notably the RAZR MAXX, but I’m definitely not a fan of the job Motorola did on Android 2.3 Gingerbread. With Ice Cream Sandwich, it’s a completely different story.

The general appearance of Google’s ICS interface is not disturbed. Instead, Motorola enhanced it with a number of subtle refinements, simple animations and slick custom icons that fit well with the overall look of Android 4.0.

An example of UI highlight on the new ATRIX is Motorola’s “Circles” widget, which is the equivalent of the HTC clock/weather widget made famous by HTC’s Sense UI.

The widget consists of three circles: a large circle on the left houses a digital clock that can be flipped over to reveal an analog clock or tapped to open the phone’s alarms app. A second large circle in the middle shows the current weather, and it can be swiped to cycle through various saved cities. Finally, a third small circle on the right shows the phone’s remaining charge as a percentage, and it can be flipped once to show data usage in the current billing period or twice to reveal the widget’s settings button.

Things like Android 4.0’s folder support are left mostly untouched, but Motorola did add a nice feature to some of its icons. Apps like Phone, Text Messaging and Calendar are represented on the ATRIX HD’s home screen by actionable icons that lie somewhere between normal, static icons and widgets. For example, a swipe on the Text Messaging icon reveals a list of recent messages, and a swipe on the Phone icon pops up a window with the device’s call log.

I also still absolutely love Motorola’s Smart Actions feature, which I wrote about at length in my Motorola RAZR MAXX review. The feature allows users to configure the phone to perform any number of functions automatically based on variables such as time, location and much more, and I wish every smartphone shipped with this functionality out of the box.

The Kevlar-covered back on the device has a great soft-touch feel to it but the rest of the plastic case feels cheap and hollow. The buttons are also made of cheap-feeling plastic, and they have so much play that if you’re not looking at the phone’s display when you press them, you might not know if a push even registered.

The aforementioned display, however, is anything but cheap.

Motorola bills the 4.5-inch 720 x 1,280-pixel panel on the new ATRIX as a “ColorBoost” display, and its performance is true to its name. Colors are remarkably rich and vibrant, and the clarity of this 326 ppi screen is likely bested only by Samsung’s Super AMOLED Plus displays and Apple’s Retina display. It really is a sight to behold.

My one complaint regarding this phone’s panel is its touch performance. Whereas most modern touchscreens register even the lightest touches, I often find that the ATRIX HD display stops registering my finger presses before my finger completely comes off the display. This is most annoying when I’m scrolling through a list, as it often results in phantom taps registering and list items being selected unintentionally.

Nokia’s Lumia 900 is a fantastic value at $99.99, but it was a wise move for AT&T to cut the phone’s price in half on the same day it launched the ATRIX HD. In terms of build quality and feel, the Lumia 900 has Motorola’s new Android phone beat by a mile. Where value, performance and overall user experience are concerned, however, the ATRIX HD is the clear winner.

At a hair under $100, the Motorola ATRIX HD packs an incredible 4.5-inch high-definition display, a dual-core 1.5GHz processor, 1GB of RAM, a decent 8-megapixel camera, microSDHC support in addition to 8GB of internal memory, 4G LTE connectivity and a 1,780 mAh battery that somehow managed to last me more than a day during usage that included tons of email, voice calling, music streaming, text messaging, Twitter checking, news reading and plenty more.

Motorola’s new smartphone feels inexpensive, but concessions clearly had to be made somewhere in order to hit that magic sub-$100 price point. As terrific as the display is and as enjoyable as the user experience is, it’s not a bad trade-off at all.

The Motorola ATRIX HD is available immediately from AT&T for $99.99 on a two-year contract.

Best in-ear headphones in 2021: Turn up the volume

Best charging cables of 2021: Reliable ways to stay powered up