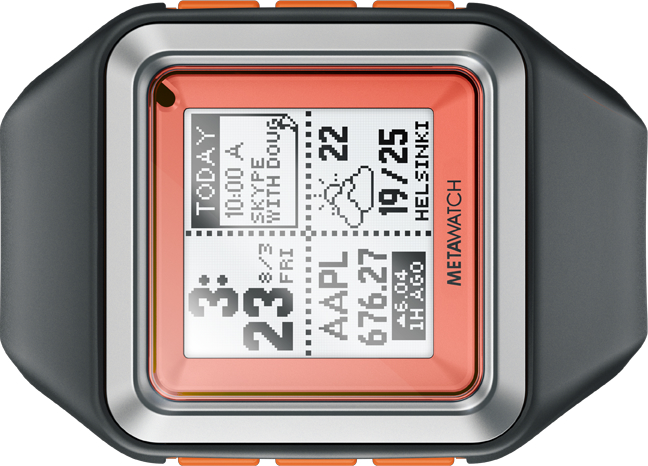 Metawatch has hired famed Nokia and Vertu designer Frank Nuovo to work on future devices for the company. Metawatch currently sells two smartwatch designs including the Strata (pictured above) and the Frame, which retail for $179.99 and $229.99, respectively, and can be purchased directly from the manufacturer’s online store or in Best Buy stores. Nuovo is already working on a new high-end device for the company, which will be unveiled in the first quarter of 2014, Quartz has learned. Details about the smartwatch aren’t available at this time, but Metawatch CEO Bill Geiser said the device will have a new operating system version and a new display. While the Strata and Frame smartwatches have their own operating system, they work with both iOS and Android devices.

Before leaving Nokia in 2006, Nuovo became famous for designing various handsets for the company, including a Vertu piece that sold for approximately $480,000. “I’ve been gnawing on [Nuovo’s] ankle for several years,” Geiser said, “To me it’s about crafting beautiful products. That’s a word you rarely hear in the smartwatch arena – the word beautiful.”

Various smartwatch models are available in stores from companies including Sony, Samsung, Qualcomm and Pebble to name just a few, as analysts expect the smartwatch business to continue to grow in the coming years. Apple is also rumored to have its own “iWatch” in stores in the future.