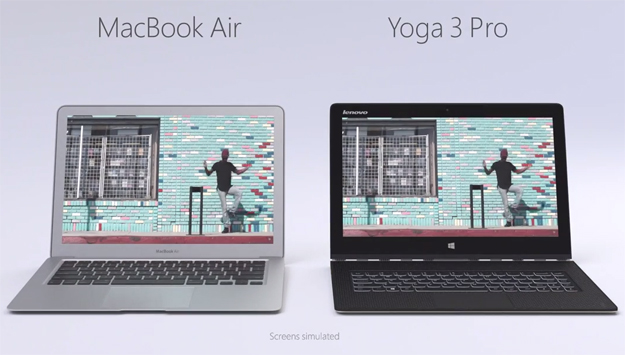 Microsoft is back to its old tricks again. The company still seems to be holding a grudge from back in the days of Apple’s “I’m a Mac” ad campaign, and it targets Apple every chance it gets in its various advertisements and marketing efforts. Last week, Microsoft informed us that its cheap $100 Lumia phone and a bunch of bundled accessories and services are a better buy than Apple’s iPhone 6, and now Microsoft is back to convince us that Lenovo’s latest ultra-thin Windows laptop is a better machine than the MacBook Air.

In a spot titled “Let’s Dance,” Microsoft pits its partner Lenovo’s new Yoga 3 Pro laptop against the popular MacBook Air from Apple, and the flexible Windows machine clearly comes out on top in Microsoft’s comparison.

The ad shows that while Apple’s MacBook Air is just a boring old laptop that supports just one single position for use, the Yoga 3 Pro can be used as a typical laptop, the keyboard can be folded back to use the machine as a tablet, or the device can be propped up as a “tent” for multimedia viewing.

Also, of course, Lenovo’s hybrid device has a touchscreen while the MacBook Air does not.