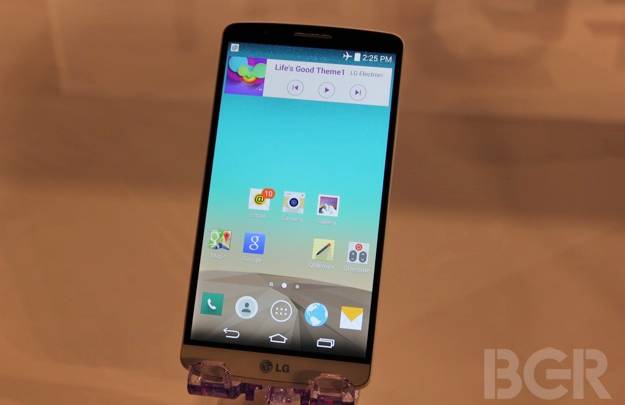 Just a few short months after the release of the G2, LG is back with a brand-new flagship device. The G3 has been leaked more extensively than any other phone in recent memory, but the leaks don’t distract from what might be the best oversized Android smartphone ever made.

As with last year’s model, the LG G3 features top-of-the-line specifications. At 5.5 inches, the G3 towers over its competition, making a strong case for the ever-increasing size of the flagship smartphone. Inside, the G3 contains a quad-core Snapdragon 801 processor, 3GB of RAM and 32GB of internal storage.

The one thing LG seems to do better than any other Android phone maker is making an outstanding display. Once again, you’ll be hard pressed to find a more stunningly bright, attractive screen than the one LG has placed in the G3. Trumping the Galaxy S5 (and just about every other Android phone on the market), the G3’s enormous 5.5-inch IPS LCD panel packs a resolution of 2560 x 1440 — that’s true Quad HD. My seemingly ancient iPhone 5 couldn’t have looked any duller sitting next to the G3.

The additional 1GB of RAM has made the G3 even faster than the G2, an already speedy device. Apps opened as quickly as I could tap on them and the phone unlocked with a smooth animation every time.

If you read our impressions of the G2 from late last year, you’ll remember how distracting the kitchen sink approach LG took to software was. As the issue has only gotten worse on many recent devices, I was apprehensive about the G3, but the software suite available on the demo devices was surprisingly tame.

KNOCK Code is a novel take on the lockscreen, splitting the phone’s display into four quadrants in which to craft a code that might be slightly less decipherable than a typical numeric code.

Smart Notice is LG’s subdued personal assistant, less flashy than Cortana or Siri, but about as effective. Smart Notice basically picks up the slack for everything Google Now doesn’t do.

Smart Keyboard brings a few improvements to the smartphone keyboard, such as allowing users to select predictive text by swiping up on the keyboard or edit messages by holding down on the space bar and sliding left or right to move between letters. Any change to something we use as often as our keyboard will take some getting used to, but these additions could theoretically speed up your typing.

With a 13-megapixel resolution, I didn’t expect to be as impressed with the camera as I was. Images looked absolutely gorgeous on the 5.5-inch display. The laser autofocus wasn’t overhyped either — if you can get to the camera app in time to capture that perfect moment, you won’t have to wait. Switching between the G3’s camera and my own DSLR, the difference couldn’t have been more obvious.

As a fan of the smaller form factor, I wasn’t entirely convinced by LG’s decision to boost the size of the flagship when I actually held the G3 in my hand. It’s not quite the “perfect radius” LG claimed it was during the press event, but I can’t deny that it was reasonably comfortable in my hand.

As unwieldy as a huge phone can be in comparison to smaller devices, the G3 is fits snuggly the palm of your hand. You might have to stretch your thumbs a little further than you would with the HTC One (M8) or the Galaxy S5, but the smooth metallic skin and shockingly light weight just about make up for it.

Finally, as much as I appreciate the buttonless sides of the G3, I just can’t get on board with the rear key. I nearly dumped the demo unit on the floor as I attempted to turn the volume down, awkwardly fumbling to reach the buttons. Once I had a firmer grip on the device, it wasn’t quite as difficult, but I sure did miss buttons I could see.

If the LG G2 had a few growing pains, the G3 is all grown up. This is a premium Android device with an unmatched display and beautiful design. It’s a showpiece for LG, and one that looks to top the G2 in every way. It might just outshine Samsung in the process.