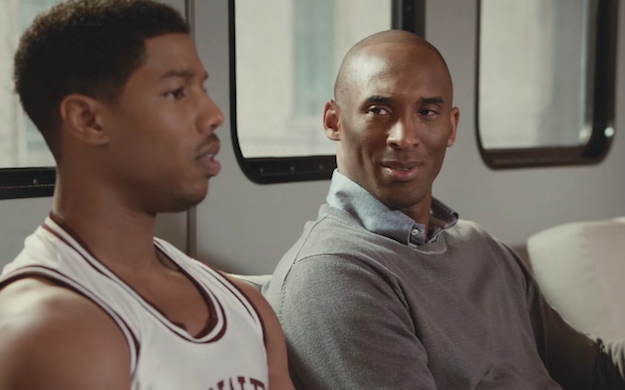 Apple yesterday released a brand new ad featuring Kobe Bryant and Michael Jordan. No, not that Michael Jordan, but rather Michael B. Jordan of The Wire, Friday Night Lights and Creed fame. Coupled with Apple’s recent Cookie Monster themed iPhone 6s ad, Apple’s advertising has certainly been on a role as of late.

While previous Apple ads featuring Hollywood personalities have been largely forgettable (ahem, Samuel L. Jackson), if not somewhat annoying, Apple’s most recent effort actually works and delivers a few laughs in the process.

Titled Father Time, the premise of the commercial is simple: Jordan is signed on to play Kobe in what we imagine is an upcoming biopic, and in order to impart a bit of wisdom and inspiration, Kobe makes use of Siri’s voice activation feature to bring up playing footage of himself in his prime. From there, the commercial goes on a clever comedic detour. Not content to only play Kobe at his peak, Jordan explains that he wants to play all angles of Kobe’s rise and fall. Jordan subsequently uses Siri in order to bring up the movie “The Curious Case of Benjamin Button” as an illustrative example. Naturally, Jordan makes a point to fast forward through to a particular scene using only a voice command.

Not coincidentally, the recent airing of this commercial coincides with Bryant’s soon to be wrapped up NBA farewell tour. After 19 seasons in the league, Bryant is slated to play his last professional basketball game later this week.

As a quick aside, it’s a pleasant surprise to see Kobe actually be willing to poke a little bit of fun at himself. I suppose the ‘Black Mamba’, after years of unrivaled intensity and dedication, has finally decided to loosen up a bit.