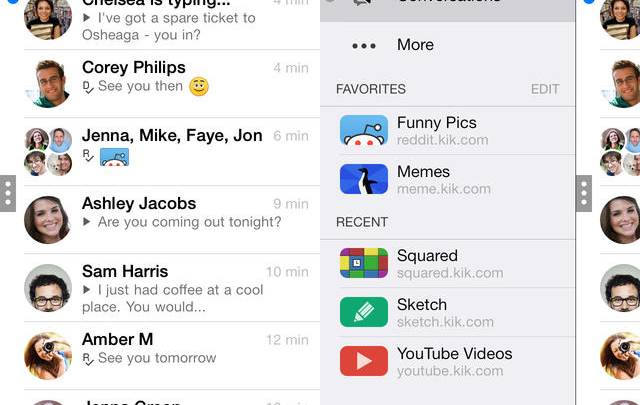 Kik is one of those messaging apps that is flying under the radar for old people, but gaining strong traction among teens and college kids. As a sign of its youthfulness, Kik actually zoomed into the iPhone’s top-10 download charts right after Christmas — this is the one period of the year when teens dominate app downloading. It’s a top-50 staple in the UK, Scandinavia, Australia, Canada and various Middle Eastern countries. The relatively broad global spread has enabled Kik to amass more than 100 million registered users. If we assume that means 30 million monthly active users, we are talking about a solid mid-tier messaging app.

But there are a couple of special things that set Kik apart. One is the fact that you don’t share your mobile number with your contacts — user names protect your number and identity. This can be important both among teens and in emerging markets where taboos against close male-female contact are strong. But perhaps even more importantly, Kik does not route its users via Apple or Google app stores when they share games or other content; it uses native content that can be accessed directly via the messaging app itself.

And this week, Kik will start displaying a web browser prominently in the app.

This means that browsing and sharing websites from within messaging app is now a snap. Sites can even choose to optimize their content for Kik so that they show up in Kik’s search results. This could make retailing experiences far smoother and more universal than it is for most messaging apps.

All Asia is agog about the ambitious e-tailing plans of companies like LINE and WeChat; these Asian messaging giants with hundreds of millions of registered users are expected to roll out aggressive retail features in 2014. But those apps keep retail in a tightly controlled and curated bubble.

Kik aims to open direct access to Etsy, Ebay, Amazon and others from within its messaging app, opening up the possibility for consumers to start integrating shopping into their daily messaging habit; sharing interesting items, sending sale info for friends or displaying wish lists.

The decision to build a messaging app on HTML5 was kind of controversial when Kik debuted in 2011. But we may soon find out how it defines and sets apart Kik from its rivals that always boot their users out of the app when they decided to browse a website or play a game.

Could integrated browsing and shopping have a meaningful impact on the messaging industry balance of power? We are about to find out.