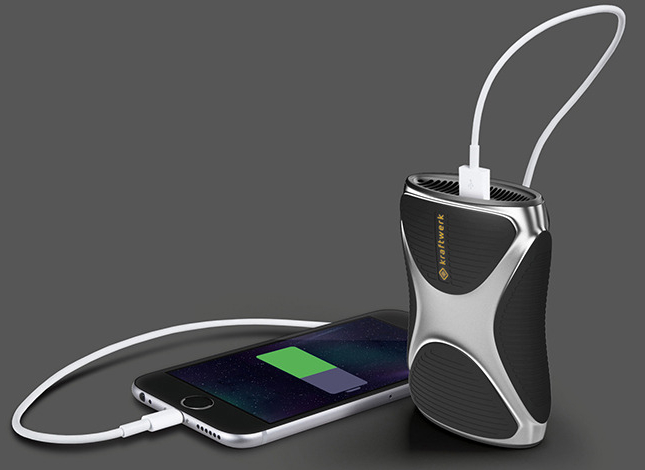 Kraftwerk is a brand-new external battery pack that has taken Kickstarter by storm. Close to reaching almost $1 million in pledges with a month still left in the campaign, this particular power pack also proposes a unique take on mobile batteries that could power up various devices, including the iPhone 6, GoPro cameras and anything else that can be recharged via a USB port.

DON’T MISS: One company may have finally solved the smartphone battery life problem

The secret component for Kraftwerk is lighter fuel. That’s right, this isn’t your average external battery pack that you need to recharge once its depleted using a power outlet.

The company describes Kraftwerk as the “first fuel cell power generator operated on standard gas,” which requires only three seconds to refuel.

The device is capable of offering about 11 iPhone charges on a 40g fuel charge — empty, the device weighs just 160g. The gadget is also highly portable, measuring just 3.94 x 2.95 x 1.18 inches. Interestingly, eZelleron says its Kraftwerk is so safe that it is allowed in your carry-on luggage.

The cheapest Kraftwerk costs $99 on Kickstarter, $50 cheaper than its future retail price, and should ship in February 2016, though early backers (early bird orders aren’t available anymore) should receive their units in December.

A video detailing this new Kickstarter project follows below.