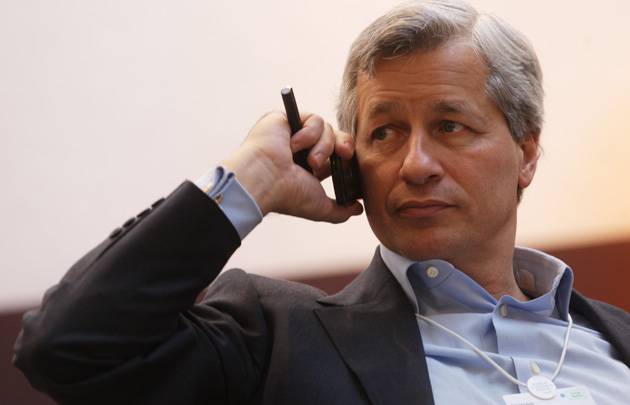 Does the CEO of JPMorgan Chase really deserve to make $20 million a year even as his bank has been in the center of multiple financial scandals ranging from its role in the Bernie Madoff scam to its handling of the infamous “London Whale” trade? If you ask him, he absolutely does and he doesn’t see why anyone should question his value.

Per Vanity Fair, JPM CEO Jamie Dimon told Meet the Press this week that we shouldn’t look to cut CEO pay as a way to reduce growing income equality in the United States, since taking all the money CEOs make and spreading it out among the workforce wouldn’t make that much of a difference.

Even if Dimon is correct on the math, it’s also been the case that real wages in the U.S. have been stagnant for years now even as productivity has continued to shoot upwards, as you can see in this graph that uses numbers from the Bureau of Labor Statistics:

Even if Dimon and other CEOs took a pay cut and it didn’t help dramatically ease inequality, there’s an argument to be made that it’s just unfair that the average worker hasn’t seen a real pay increase even as their productivity has soared and has sent corporate profits to record highs.

Of course, the issue of income inequality isn’t the only reason that Dimon might deserve to have his pay slashed — there’s also the fact that he’s overseen the bank at a time when its reputation has been driven into the mud and has been forced to fork over billions in fines for alleged wrongdoing.

And JPMorgan shareholders are increasingly coming around to the notion that Dimon is absurdly overpaid for what he’s done. Earlier this year, Dimon’s $20 million compensation package won just 61.4% of the shareholder vote, which is a surprisingly low percentage. Typically, executive pay packages breeze through with 70% of shareholders approving or higher.

Either way you look at it, there are probably some very good reasons for Jamie Dimon to be paid less money.