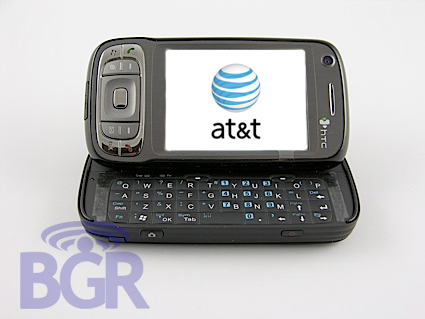 Now that the so-called “Jesus Phone” has landed with AT&T, people have wondered if there is still a place in the world for the HTC Kaiser. According to one site, the answer is an unqualified “Yes.”

They claim that the HTC Kaiser will be coming to AT&T as the 8925, keeping the same model number scheme as previous HTC Windows Mobile devices. For those who have been living under a rock, the 8925 will sport a sliding, tilting keypad, 3MP camera with auto-focus, and built-in GPS. Of course, it’ll take advantage of AT&T’s 3G network, and comes loaded with 256MB of ROM and 128MB of RAM.

Where current Windows Mobile 6 devices are finding that 64MB of RAM is quickly eaten up by the OS and memory leaks in applications, 128MB should be plenty. Further, the phone’s faster data and advanced features could lure away potential iPhone subscribers when they can finally see that there is a lot more value to be had for the money. Or not.No one ever said that the iPhone was a rational purchase.

So when can you find the 8925?  “Supposedly the Cingular 8925 will be available in August 2007”, but I’d recommend taking that date with a hefty pull on a salt lick. It’s unlikely AT&T would be willing to slow the momentum of the iPhone by launching the 8925 so close.