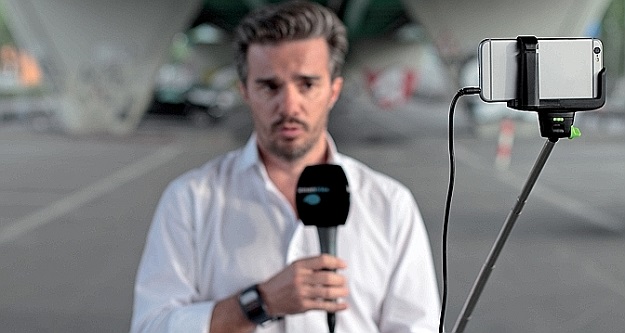 In a story that underscores the ever-increasing camera quality on Apple’s iPhones, a TV station in Switzerland recently decided to abandon traditional TV cameras and replace them with iPhones.

Originally spotted by PetaPixel, the TV station Leman Bleu late this summer gave each of its reporters an iPhone 6 along with a selfie stick to use during both pre-recorded and live TV shots.

TV station director Laurent Keller reportedly explained that the iPhone is not only more portable, but will also help keep costs down. Additionally, with an iPhone in tow, reporters will be more mobile and will theoretically have the ability to “go live” at a moment’s notice, all without having to worry about lugging around heavier camera equipment.

What about quality? Keller says iPhone video is different but not necessarily inferior to what a standard TV camera produces. “It’s up to us to reinvent the grammar of the image, to learn to shoot differently,” he said. The technology allows the station to go live at any time from anywhere, either on the air or on social media. That’s important to a small regional channel that broadcasts only a few hours a day.

Interestingly enough, this isn’t the first time a TV station has attempted such an experiment. As PetaPixel notes, a station in Charlotte, North Carolina tried something similar last year, only to revert back to standard TV camera equipment after viewers noticed a frustrating drop in quality.

[The station] pulled the plug due to the quality of the result. “Plagued by technical problems and relying on journalists with little experience, it had an amateurish quality,” the station reported afterward. “Viewers turned away.”

With the new iPhone cameras now being able to capture footage in 4K quality, it’ll be interesting how the switch to iPhone will pan out for the Swiss TV station.