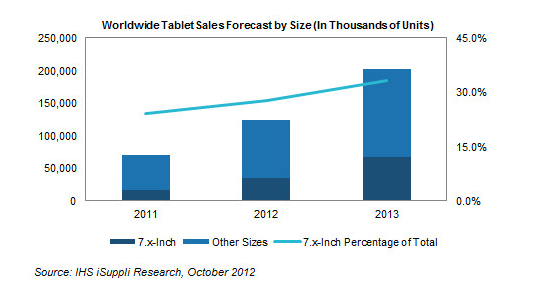 Worldwide sales of 7-inch tablets are expected increase from 17 million units in 2011 to 34 million in 2012, according to the latest numbers from research firm IHS iSuppl. The firm estimates that sales will once again double in 2013 to 67 million units, largely due to Apple’s (AAPL) upcoming iPad mini. Despite the fact that the late Steve Jobs claimed consumers weren’t interested in smaller tablets, the 7-inch size range already accounts for 28% of all projected tablet sales in 2012 and is on pace to increase to 33% in 2013. Per iSuppli, Apple’s smaller tablet is “poised to rule the market for 7.x-inch products,” just as its larger iPad has done, and is expected to “spur rapid sales growth” in 2012 and 2013.

“The battle in the 7-inch space is highly spirited, with most of the other leading vendors already offering price-competitive products in this size range,” said IHS’ director of tablet and monitor research, Rhoda Alexander. “IHS predicts Apple will successfully position the smaller iPad as a device that will be attractive and easy to adopt for both new and returning customers. This will spur rapid sales growth and provide tough competition for other companies contending in this size range.”

The research firm expects demand for smaller and more affordable tablets to be particularly high in Asia and notes that if Apple can meet demand, 2013 sales could be “off the charts.” Similar to the iPhone, however, a combination of production challenges and component supply shortages are seen as factors for limiting shipments.

“Reported production difficulties point to the likelihood that Apple is once again pushing design boundaries with the new product,” Alexander said. “Sources also indicate there have been some supply issues for parts used in the Apple Lightning connector and in the display. If Apple can resolve these issues rapidly, 2013 shipments and sales may exceed the current forecast dramatically.”