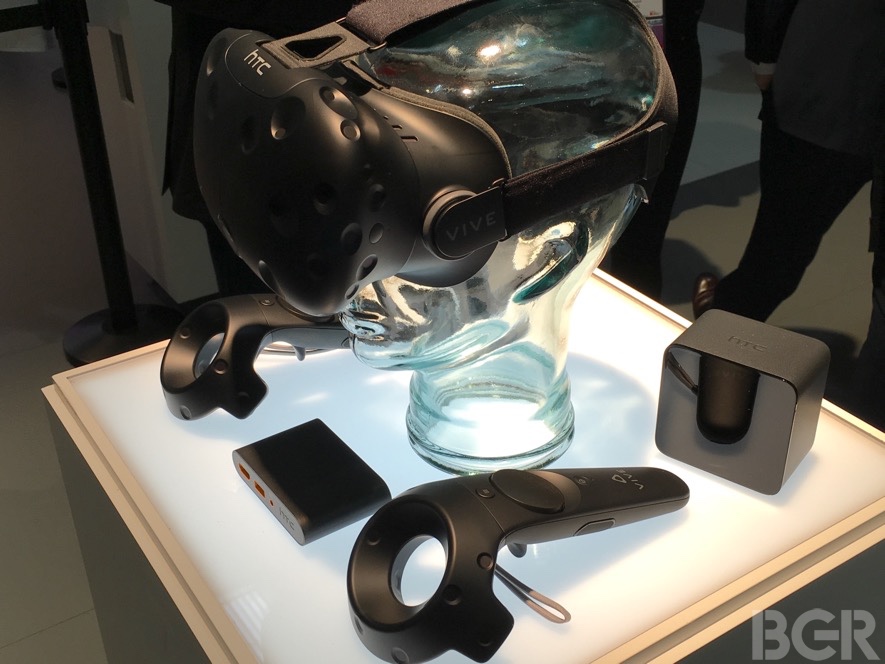 There’s nothing that wakes you up when the second-day fatigue hits you at MWC like a dose of virtual reality. And who would have thought a few years ago that HTC, Samsung, and LG would extend their smartphone and tablet battles into a brand new business: Virtual reality.

After being disappointed by LG’s first VR headset and amazed by what a 4D experience feels like using Samsung’s Oculus-powered Gear VR, I tried HTC’s Vive. In the year since its announcement, the device went through a few design changes and I have to say right from the beginning that there’s really no contest. If you want VR done right, it looks like the Vive is the way to go.

DON’T MISS: 10 hidden iPhone features that’ll help you get the most out of your phone

That’s hardly surprising considering that the Vive is powered by a computer that has a lot more processing power than a smartphone, which is what displays virtual content in Samsung and LG’s products.

Furthermore, HTC is partnering up with Valve, a company that knows a thing or two about making games.

Again, that’s not to say that Samsung or LG have it wrong. It’s just that HTC took a different approach to designing VR for the masses, and its first product can offer a more immersive, feature-rich experience than VR gadgets that rely on a mobile device. On the other hand, LG and Samsung’s headsets might be best used for quick VR consumption, whereas the Vive – and the Oculus Rift – might be better for complex games and other experiences.

The one slightly annoying thing about the Vive is that it’s permanently tethered to a computer. Valve explained during HTC’s media briefing a few days ago that the computer has to push 90 full HD images to each eye every second to make it all possible, so a corded connection is needed. But eventually, you’ll get used to it and learn not to trip.

If you do need to see what’s around you, you won’t have to take the headset off. Just push a button and the cameras will show you everything in front of you — it’s kind of like The Matrix. You’ll see contours of objects and people around you, and you’ll be able to untangle yourself or avoid falling.

Before you ask, while I was supervised during my trial, it’s perfectly safe to use the Vive at home all by yourself while standing and moving around. The Chaperone system will tell you if you’re about to walk into a wall by showing you a grid that indicates you’re approaching an object.

And you’ll have enough space to do it, as the laser emitting base station give you some 15 x 15 feet to walk around and explore. You will have to walk around and explore too. How else would you appreciate the enormousness of the giant whale that parks itself quietly behind you while you’re submerged in a ship? How else will you shoot down wave after wave of robots coming to destroy you?

Yes, I had a blast trying out HTC’s demos, and the fluidity and richness of the graphics was very impressive.

The controllers are pretty intuitive though you will need to get used to them. You will see them at all times on the screen, and you’ll soon understand which virtual buttons to press and how to select options.

By the way, I’m hardly an artist, but painting in VR is so cool.

I may have tried a Vive Pre (second video above), which isn’t the more refined version hitting stores shortly, but the experience was awesome. VR is finally shaping up to be the great kind of product we envisioned as kids, and HTC might be at the forefront of this emerging technology.

The Vive Phone Service was not included in the demo, but that will also be part of the Vive product selling in stores this April. This nifty software lets you interact with your phone for incoming calls and messages without taking off your headset.

If you can, try as many VR devices as you can before you buy one so that you can make an informed purchase decision. A VR headset as simple as the Google Cardboard might be perfect for short bursts of VR consumption, but real VR experiences will certainly look a lot better on a Vive, Oculus Rift or any other dedicated VR headset that can harness the computing power of a gaming rig.

Oh yes, and make sure you save cash of your VR purchases, as these first edition devices will not be cheap.