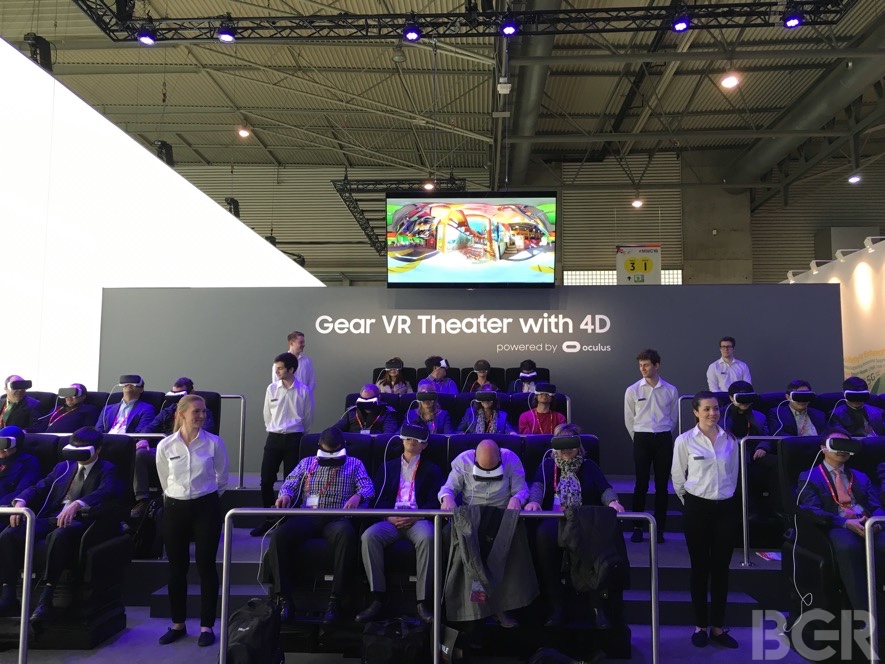 Samsung has “Gear VR Theater with 4D” experiences set up in at least three locations in Barcelona, Spain, including the Galaxy S7 venue, a cube in front of one of Apple’s stores, and in its huge booth at MWC 2016. Anyone who has tried the Gear VR headset undoubtedly expects some sort of virtual reality experience from these theaters, but what’s the 4D all about?

I took Samsung’s virtual reality show for an eyes-on spin at MWC, and the company truly made me believe that I was riding a roller coaster outdoors in California rather than sitting inside a giant hall at a Spanish mobile trade show.

As you can clearly see in the image above, the Gear VR Theater experience involves wearing Gear VR headsets, which are intended to remove you from the reality you know and transpose you to the virtual world. Furthermore, everyone is seated in special seats that come complete with belts to strap you in and a hidden motor beneath them.

So here’s how it all works.

There’s a huge line, and people gather around to watch you enjoy this VR experience.

The theater only seats 28 people at the time and the equipment is cleaned before the next batch of people enter.

You strap in, put the headset on, and focus the image. The chairs are really comfy.

People in white are there to help, and they’ll tell you what’s coming next. It’s okay if you feel disconnected from the outside world.

The video starts playing (no pictures for that, unfortunately), and you find yourself at a Six Flags amusement park in California.

The experience is surreal.

Once the show starts, you find yourself strapped into the first car of a roller coaster train, and you’re climbing the tracks. Surprisingly, though you know you are safe in a chair located at one of the busiest placed in the world today, the adrenaline still kicks in. You know the drop is coming and you’re slightly afraid of it just like in real life. Your instincts kick in, and you’ll move your head around to see what’s going on around you.

You’ll also try to see exactly when you’re about to drop, but you can’t, that’s how abrupt it is. Then it finally hits. It’s not as violent as in real life, but the 4D experience does make you feel like you’re on a real roller coaster ride. The G forces aren’t as strong of course, but you’re still tossed and turned a bit, and you would definitely fall out of the chair if you weren’t buckled in.

This was my chair and headset. In the Gear VR, there’s a Galaxy phone powering the experience.

This is what’s behind the chairs, they’re all connected to a mothership computer that syncs the video with the 4D feedback.

As soon as you remove the headset, you’re back in Barcelona. The entire experience lasts about 10 minutes and the actual VR ride is less than five minutes long.

In all, I waited around 30 minutes in line so that Samsung could take me on a wild roller coaster ride. The Gear VR experience seems to be getting better and better, and the partnership with Facebook’s Oculus is certainly paying off. I can’t help but be excited about what’s to come in the next few years, and we can expect similar immersive VR experiences to be offered around the world in the future.