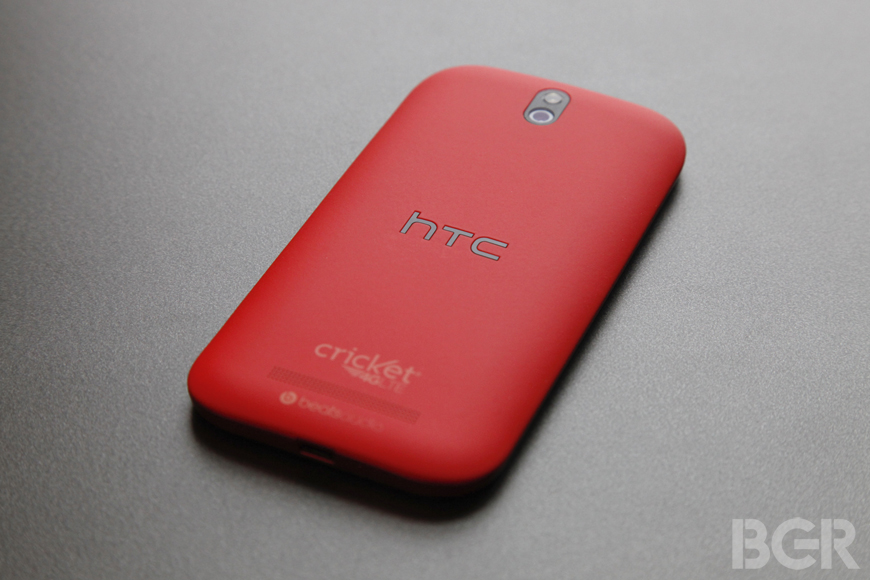 One after another, HTC (2498) churns out positively gorgeous smartphones that make most rival Android handsets look like cheap toys. Stunning though the company’s work may be, HTC continues to struggle. After ending 2012 on something of a high note, HTC faces a daunting challenge in 2013. More than outdoing its previous designs, more than pushing the envelope with thinner phones and increasingly impressive specs, and more than innovating with new software and services, HTC must find a way to catch consumers’ collective eye despite the constant marketing barrage from its larger rivals.

HTC’s combined revenue totaled about $10.6 billion in 2012. To put that figure in perspective, Samsung (005930) racked up $8.3 billion in profit during the fourth quarter alone and Apple’s (AAPL) profit last quarter is expected to come in at around $13 billion.

This is what HTC is up against.

With that in mind, it is painfully clear that HTC’s first new phone of 2013 will do nothing to help it regain momentum.

The HTC One SV is a fantastic mid-range smartphone that has all the makings of a winner… except for the marketing support and extensive carrier support.

To date, the phone has only been announced by one U.S. carrier — Cricket Wireless — and it will cost a hefty $349.99 when it launches on January 16th. As is the case with all Cricket phones, that unsubsidized price does not require that customers sign a service contract so it is actually quite competitive. A comparable phone from Verizon Wireless (VZ) or AT&T (T) might cost $450 or more with no service contract.

Within Cricket’s current smartphone portfolio, the One SV is the cream of the mid-range crop. In fact, I might consider it Cricket’s best smartphone, period, if not for the Galaxy S III, which is only available in some markets.

I have been testing the One SV for just under a week now, and here are my thoughts:

The design: This phone is gorgeous. Seriously. Gorgeous.

The One SV is about the size of Apple’s iPhone 5, but a little wider. The face is a single sheet of glass that covers the display and three capacitive navigation buttons, and the back of the phone is a smooth contoured plastic with a soft-touch rubbery feel that is easy to grip and feels great in the hand. Joining the two is hard plastic that wraps around the edges of the phone and has a great metal-look finish.

HTC calls the color of this phone “Flame.” It combines two different shades of red — a lighter red with an orange hue on the back and a deeper red around the edges — and the result is a phone that will definitely turn some heads. The icons for the capacitive buttons beneath the display are red as well.

The build. As we have come to expect with all HTC phones, the One SV is a very solid handset. It’s on the lighter side, but there are no creaks or rattles of any kind. HTC has proven once again that it sets the gold standard for Android smartphone build quality in the low-, mid- and high-end ranges.

The display. The screen on the One SV can’t match the panels found on flagship phones like the iPhone 5, Galaxy S III or DROID DNA, but it’s a terrific display for a mid-range handset. Colors are vivid, it gets nice and bright, and it’s surprisingly clear for a 4.3-inch display with so few pixels.

Battery life. I was easily able to get a full day of moderate usage out of the One SV. That includes a few voice calls, plenty app usage, Web browsing, some music streaming and checking email more often than anyone should.

The price. $350 seems like a tall order for a mid-range smartphone but people pay much, much more than that over the course of their smartphone contracts on other carriers. Unlike Verizon, AT&T and the like, the bulk of this smartphone’s cost isn’t built into the service plan.

The cost of service. Cricket’s pay-as-you-go service is much cheaper than similar offerings offered by the top two carriers in the U.S.

For example, Cricket offers a smartphone plan that includes unlimited voice calling and messaging along with 1GB of full-speed data for $50 a month. A comparable plan from Verizon would cost $90 each month, or an additional $960 over the life of a two-year Verizon contract compared to Cricket’s plan. At AT&T, a 1GB plan costs $85 per month, or $840 more than Cricket service over the course of two years.

With Cricket’s 4G LTE plans, you get even more bang for your buck as the base $50 plan comes with 2GB of full-speed data, which is on par with Verizon’s $100 service plan.

That $350 phone isn’t looking so expensive anymore, is it?

For what it is, the One SV is a pretty smooth handset. It does have a tendency to get tripped up if you try to bounce between apps too quickly though, and I found that the phone stuttered from time to time when scrolling on Web pages or in some apps like Twitter.

Overall, performance is on par with most modern phones in the One SV’s price range.

Cricket has a 4G LTE data network but it is barely in its infancy right now, covering only a handful of cities in Texas and Arizona along with Philadelphia, PA. Beyond that, you’re looking at EVDO data speeds.

My tests in and around New York City yielded download speeds ranging from 170kbps to about 800kbps and upload speeds that averaged about 400kbps but were sometimes as slow as 40kbps.

Coverage. Cricket is a nationwide carrier, but don’t expect coverage that approaches the four major U.S. carriers. I had no problems whatsoever in the areas where I live and work as New York City and the surrounding region is well blanketed by Cricket. There are massive gaps in coverage across all of the United States, however, so be sure to check out Cricket’s coverage map if you’re considering the One SV.

The One SV is yet another gorgeous HTC phone that few in the U.S. will ever own.

The design is sleek and unique, the fit and finish are top-notch, and the total package is among the best available in the mid-range class.

And then there’s the value. One SV users on Cricket stand to save a tremendous amount of money compared to those using a similar phone on one of the nation’s top carriers.

In terms of helping HTC’s cause, however, the One SV is going nowhere fast in the U.S.

Cricket is a small carrier that serves fewer than 6 million customers so selling a significant number of handsets isn’t really a possibility for HTC. A larger carrier may still pick the phone up at some point but for now, HTC’s first new phone of 2013 is sadly a non-starter in the grand scheme of things.

I hope that the One SV gets attention from some bigger carriers in the U.S. though, because with some solid marketing and attractive pricing at a larger carrier, it could certainly do well among subscribers seeking a low-cost phone that stands out from the crowd.[bgr-post-bug]