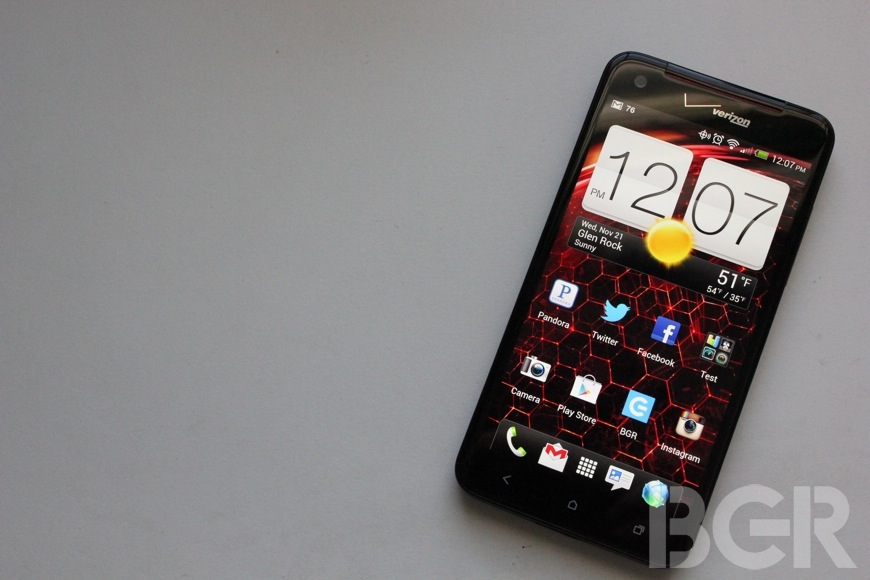 Things haven’t been going well for HTC (2498). The company continues to lose market share to Samsung (005930) and Apple (AAPL), among others, and has seen its stock plummet over the past year. It was only a short time ago that HTC was riding high in the mobile space — in the third quarter of 2011, the Taiwanese manufacturer led Samsung to take the top spot in the U.S. smartphone market. The company couldn’t keep its lead, however, and sales of its One-series smartphones have been less than spectacular. HTC needs a game-changer and it believes it has found it with the DROID DNA smartphone on Verizon Wireless (VZ). In a crowded mobile market, is HTC’s latest effort too little too late?

On paper, the DROID DNA is perhaps the most appealing smartphone ever. Yes, ever. The device is able to pack the latest hardware into a relatively slim and beautiful design, measuring in at 141 x 70.5 x 9.7 mm. Despite having one of the largest displays available on a smartphone, the DROID DNA is the same width as Samsung’s Galaxy S III and less than 3mm wider than Motorola’s DROID RAZR HD. HTC has followed in Apple’s footsteps and rather than making the device wider like a Galaxy Note, the company decided to make it taller like the iPhone 5. But while it may be taller than traditional smartphones it is nowhere near as tall as the Note — in fact, the DROID DNA comes in a mere 5 millimeters taller than the Galaxy S III and is 10 millimeters shorter than the Note.

HTC’s design hasn’t changed much in the past few years but this isn’t a bad thing. If you have held one of the company’s smartphones recently you will understand what the DROID DNA feels like in hand. HTC has managed to find the perfect equilibrium of design, and its build quality lies in between that of Samsung and Motorola. It doesn’t have the plastic and cheap feel that some smartphones have but at the same time it isn’t a heavy-bullet-stopping Kevlar clunker either; it just feels great. If you have never been a fan of HTC’s design, however, the DROID DNA won’t be as appealing for you.

If you are worried about the size and portability of the DROID DNA you have nothing to fear. I have relatively small hands and I had no trouble whatsoever adjusting to the oversized smartphone. Thanks to its slim build, the handset will fit in even the skinniest of jeans, although you will be forced to endure the clichéd rants of, “is that a smartphone in your pocket or are you just excited to see me.”

From the first time the smartphone is powered on it is clear that the most impressive feature of the DROID DNA is its brilliant screen. The handset features a full HD 1920 x 1080 pixel resolution display with a whopping 440 pixels per inch, well above what the human eye can see. When compared to other Super AMOLED devices, the DROID DNA’s Super LCD 3 display didn’t have an annoying blueish tint, although a side-by-side comparison did reveal that it wasn’t as bright with its settings turned all the way up. Perhaps best of all, the DROID DNA’s display doesn’t include the controversial PenTile matrix that other manufacturers have included in their phones.

To power such a beautiful screen, HTC has incorporated the very best hardware into the DROID DNA. The device is equipped with a 1.5GHz quad-core Qualcomm (QCOMM) Snapdragon S4 Pro processor that keeps everything running smoothly and 2GB of RAM that makes multitasking go off without a hitch. Within minutes of playing with the DROID DNA you will be impressed with the phone’s performance, which never seemed to give in even under the harshest conditions. The device also runs on Verizon’s ultra-fast 4G LTE network and is powered by Android 4.1.1 Jelly Bean, one of the most recent versions of Android.

As is the case for most smartphones, with the good comes the bad and unfortunately HTC is no different. The DROID DNA includes a mere 16GB of internal storage and does not feature a microSD slot. Being stuck with 16GB of space is bad enough but in reality it gets worse since only 11GB is available from the get-go. Considering HD movies and most high-end games take up more than 1GB of space, this is unacceptable. I understand companies are embracing the cloud, but for smartphone users who are stuck on shared or limited data plans, it is not feasible to stream music, movies and TV shows unless Wi-Fi is readily available.

The DROID DNA includes built-in wireless charging capabilities that are said to be compatible with most wireless charging pads. HTC also included another brilliant feature, a rear notification light, so no matter which way you put your phone down, you will always be able to see if you have a notification.

Like other recent HTC smartphones, the DROID DNA comes with Beats Audio, a feature that enhances your music experience with higher bass levels and less distortion. It is a welcome addition but the handset doesn’t even come with headphones, let alone special Beats headphones like previous models.

Nokia (NOK) and Apple have produced some of the best cameras in smartphones to date, but HTC is not far behind and with each new flagship device the company demonstrates what it is capable of. The DROID DNA has an 8-megapixel rear camera that includes HTC’s ImageSense processing chip and custom software, which grants users the ability to shoot full 1080p video and capture still images at the same time. In even lighting, the DROID DNA takes impressive photos and is easily one of, if not the, best Android shooter. In low-light situations the f/2.0 aperture lens performs well and allows the handset to take average quality photos.

The front of the device features perhaps the best 2.1-megapixel camera I have ever used, although that isn’t saying much. The front-facing shooter is capable of filming 720p HD video and has an ultra-wide angle 88 degree lens that makes taking self shots with all of your best friends a breeze. HTC’s camera software, which is one of the best in business, also includes a touch-to-capture and auto-smile capture feature, along with continuous shooting, face detection, group portraits, panorama mode, picture filters and slow motion video, among other things.

When it comes to the DROID DNA’s battery life you shouldn’t believe everything you read. The 2020 mAh battery was more than sufficient and I was able to achieve more than 13 hours of battery life with moderate usage — texting, making calls, checking social media and browsing the web. In fact, the DROID DNA even outlasted my Galaxy Nexus and its extended battery.

The one gripe I have about the battery is that HTC chose to make it non-removable. Everyone is different in the way they use their phones, the DROID DNA lasted 13 hours for me but for other users it could be more or less. Being able to swap out batteries or adding an extended one is obviously preferable because you won’t have to constantly search for the nearest outlet.

HTC also thought it would be a good idea to include a cover over its microUSB port, which looks good but it isn’t practical since it makes it extremely difficult to lift up. In other words, charging the device can be a hassle.

You know those features that aren’t exactly good but at the same time don’t hold a device back? Well that is HTC’s Sense user interface in a nutshell. I have made it clear time after time again that I am not a fan of manufacturer skins, as I see them as buggy and the reason Android devices are not frequently updated. Sense 4+ on the DROID DNA, on the other hand, is an enjoyable experience. In short, it takes the complications out of Android and makes it more “Apple-like” with friendly animations and a simplified user experience. While I didn’t notice any sluggishness in Sense 4+, on a personal level I still prefer the stock Android experience.

I did notice that a number of apps such as Angry Birds: Stars Wars, Xbox SmartGlass and Flipboard are either unavailable or unusable on the DROID DNA. I can only assume it has something to do with the smartphone’s super high-resolution because even apps that are compatible such as Google Chrome feature various display quirks.

While we are on the topic of apps, the DROID DNA comes preloaded from head to toe with a variety of applications from Verizon, Amazon and HTC. Luckily all of these programs can be disabled — although not completely removed — through the Android settings.

With the DROID DNA and its full HD display, HTC has set a new standard in the mobile industry. Along with an impressive design, a quad-core processor that speeds through any task and a camera that is unmatched by its Android competitors, the DROID DNA is tough to beat. When you throw in features such as wireless charging, the nifty rear notification light and Beats Audio technology, it is clear that this phone is a winner.

It does have its shortcomings, however. Users who are interested in all day battery life and expandable storage may want to look towards Motorola’s DROID RAZR MAXX HD, while those wanting a true smartphone-tablet hybrid should check out the Galaxy Note II. There are also concerns about HTC and future software updates since it isn’t clear if HTC’s recent smartphones will ever see Android 4.2 or any other future versions of the operating system.

The DROID DNA is available immediately from Verizon Wireless for $199.99 with a new two-year agreement.[bgr-post-bug]