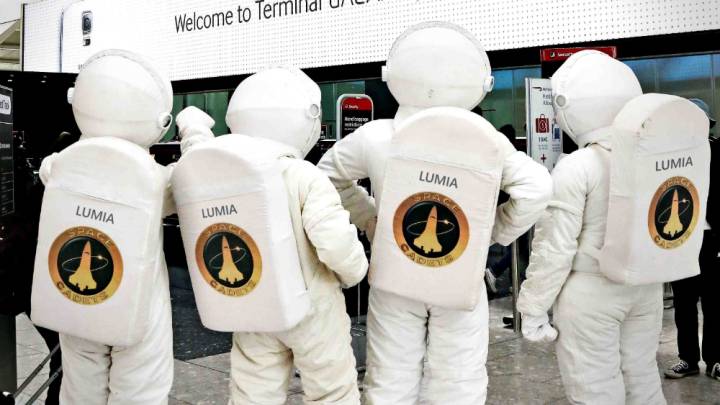 “If you’re a regular reader, you’ll know that Lumias have a proud history of boldly going to places no smartphone has gone before,” Nokia said in a new post on its Conversations blog post. “In fact, Lumias have been shot into orbit not once, but twice in the last couple of years. Imagine how excited we were then to learn that you can now reach ‘the Galaxy’ via Heathrow’s Terminal 5. This weekend, to make the most of this stellar opportunity, we sent four intrepid Lumianauts to Europe’s busiest airport.”

Dressed like astronauts, four people with Lumia branding went to Terminal 5, looking to find a way to explore the new galaxies. Unfortunately, the Lumianauts “quickly learned there was no such thing as flights to ‘the Galaxy,’” and that “rather, the terminal had taken over by advertising for another mobile phone company.”

“While our Lumianauts sadly didn’t make it into orbit this weekend, we can all console ourselves with the knowledge that the Lumia we have in our pockets is always out of this world,” Nokia concluded.

It’s not clear whether the company made an impression with travellers, or whether passers-by even realized the joke, but this definitely goes to show that Microsoft is ready to engage its rivals in some out-of the box ad campaigns.

For what it’s worth though, a Galaxy device branded and sold as the Nexus S was officially sent to space by NASA not once, but twice. That’s not counting the unofficial balloon-powered, Lumia-like space trip the same phone made before its more official space missions.