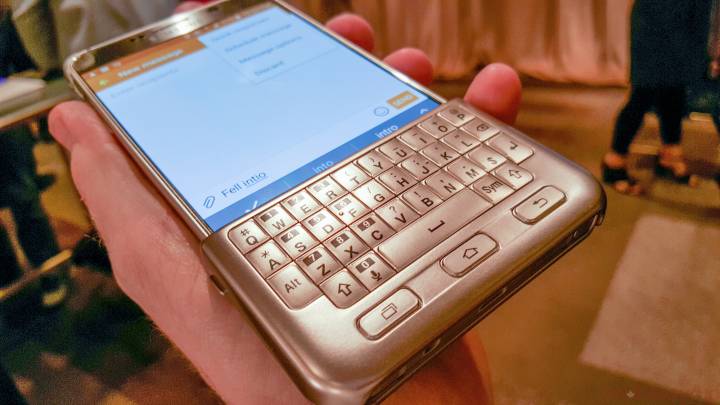 As BlackBerry has found out time and time again, almost no one is buying smartphones with physical keyboards anymore. Samsung never got the memo, however, which is why it made one of the silliest accessories it could possibly come up with for its shiny new phablets: An extremely ugly physical QWERTY keyboard that you shouldn’t be caught dead using with the Galaxy Note 5 or Galaxy S6 edge+.

Just look at these images! No matter how fond of physical keyboards you might be, this still doesn’t change the fact that the keyboard above looks just awful.

And think of all the confusing messages Samsung is sending with this particular accessory. For starters, Samsung wants to cover that enormous and gorgeous display with a horrid piece of plastic. What’s the point of a big display then? Wouldn’t you be better off pairing a smaller smartphone with an actual Bluetooth keyboard that you could take with you at all times and whip out when you feel like being the most productive smartphone owner in the coffee shop?

Secondly, Samsung is suggesting that its own virtual keyboard can’t really get the job done as fast as a real keyboard can. On the same note, Samsung basically tells us that after all these years in virtual keyboard innovation, all those apps that can predict and autocorrect our writing still can’t match a butt-ugly plastic keyboard attachment.

Thirdly, the Galaxy Note family already has an iconic built-in feature that differentiates it from the competition: The S Pen stylus that gets improved generation after generation and that can be used, among other things, to take notes. There is simply no way that the hideous keyboard attachment Samsung introduced today will be able to match its functionality.

Finally, after all the effort that went into crafting Galaxy handsets that users wanted to buy for years, Samsung is ready to torpedo its gorgeous new phones with a crappy piece of plastic that hides away the beautiful designs that it’s worked so hard to perfect.

Samsung has done a lot of things right this year but the new keyboard attachment is a blunder that we’ll look back on in a year’s time and wonder, “What were they thinking?” In fact, it’s safe to say I’m wondering that right now.