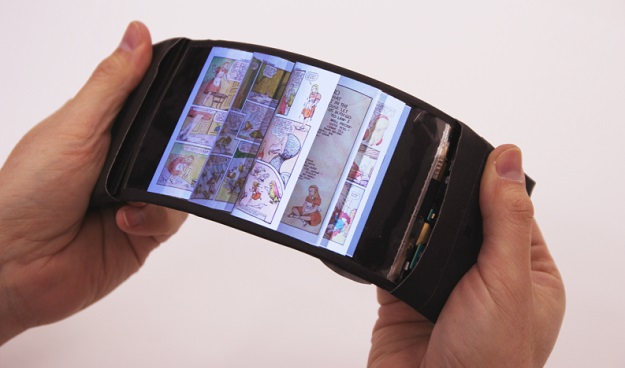 Researchers from the Queen’s University Human Media Lab recently unveiled the ReFlex, a smartphone prototype featuring a flexible and surprisingly functional display. By combining a bendable LG OLED display from LG with both multitouch input and bend sensors, the device is able to detect the degree to which a user bends the device in either one or two directions. Not only that, but the device can trigger tactile feedback based on specific use-case scenarios.

“This represents a completely new way of physical interaction with flexible smartphones,” Human Media Lab director Roel Vertegaal explained in a press release. “When this smartphone is bent down on the right, pages flip through the fingers from right to left, just like they would in a book. More extreme bends speed up the page flips. Users can feel the sensation of the page moving through their fingertips via a detailed vibration of the phone. This allows eyes-free navigation, making it easier for users to keep track of where they are in a document.”

Powered by Android 4.4 KitKat, the video below demonstrates how the ReFlex can be bent to accelerate how quickly an app flips through pages of a book. In another use-case illustrated in the video, a user playing Angry Birds can bend the phone and pick an appropriate flight trajectory as opposed to using traditional multitouch methods.

There’s no denying that the demo is intriguing, but one has to wonder what type of more practical use-case scenarios are out there. The book-reading and Angry Birds-playing examples are nice, but I’m not sure they’re exactly game-changing. That said, it’s not as if there’s any rush. According to researchers, it will be at least a good five years before such a flexible display becomes ready for mainstream use.