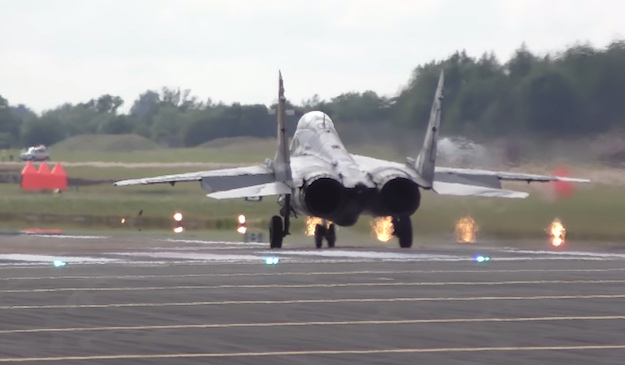 Just a few weeks ago we highlighted an incredible video showcasing a Boeing 787-9 Dreamliner taking off at what’s almost a 90 degree angle. But extreme and harrowing takeoffs get pushed to an entirely new level when we’re talking about military grade fighter jets. Built for speed and for air to air combat, the average fighter jet can perform feats that are absolutely mesmerizing and might even dissuade you from air travel for a few weeks.

Earlier this month we highlighted what it looks like from within a cockpit when an F-16 fighter jet takes off at breakneck speed. And now we have even more crazy and stress-inducing footage to show you.

The video below is of a MiG-29 taking off and it has to be seen to be believed. Things start off normal enough, with the plane steadily climbing at a 45 degree angle. But then, out of nowhere, the pilot puts the proverbial pedal the medal, turns his rockets on full blast, and blasts off into the sky vertically.

What’s all the more impressive is that the MiG-29 is hardly a new aircraft. Indeed, the Russian fighter jet was originally introduced all the way back in 1983 but remains in production and in use across a few European countries. I suppose you simply don’t mess with a classic.

If the video above has you even somewhat intrigued with the MiG-29, well, we can’t blame you. If you want to see some more action of this majestic plane taking off, we’ve got you covered.

All in all, these videos certainly make you appreciate the more controlled and subdued takeoff of a Boeing 747.