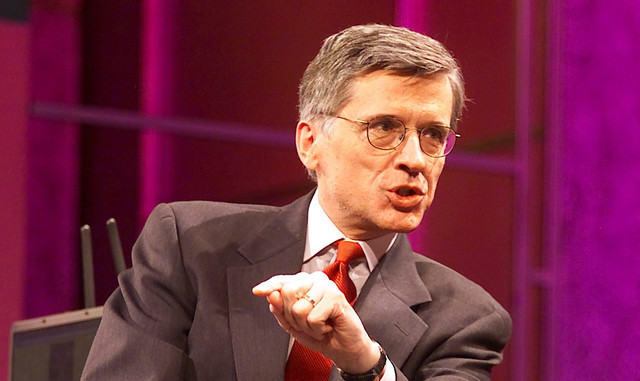 Let’s assume for the sake of argument that former cable lobbyist and current Federal Communications Commission chairman Tom Wheeler isn’t a cynical shill for big business and is being completely sincere in his latest blog post about “finding the best path forward” in “defending” the open Internet. I begin with this premise because even if we take Wheeler’s statements at face value, he’s still showing a completely wrong-headed approach to regulation that I’ve long found disconcerting ever since I read his take on why AT&T should have been allowed to buy T-Mobile.

For those of you who don’t recall, Wheeler said back in 2011 that the government should approve AT&T’s plan to buy T-Mobile as long as AT&T agreed to “a consent decree to pseudo-regulatory behavioral standards” that would hopefully be pushed out to the rest of the wireless industry at some point. Wheeler even conceded that such consent decrees are “traditionally for a limited duration,” but he also said that “such concepts once established with the largest carrier could have been lifted into subsequent consent decrees for other carriers and even into the terms for subsequent spectrum auctions.”

As we now know, the FCC under former chairman Julius Genachowski was instrumental in blocking the AT&T/T-Mobile merger and the wireless industry is much, much better off for it. Instead of having two massive carriers and a doomed Sprint, we now have a much more competitive industry where T-Mobile has made aggressive moves to win over customers and force Verizon and AT&T out of their comfort zones. In this instance, the best option was to simply preserve a competitive market and give consumers multiple options for choosing their wireless providers.

Just like with the AT&T/T-Mobile merger, Wheeler’s net neutrality rules propose giving a powerful corporate interest something it wants in exchange for agreeing to live under the vague threat of future regulations that depend entirely on the whims of the regulators who may or may not feel like enforcing them.

In this case, Wheeler proposes letting ISPs create Internet “fast lanes” where they could charge big content companies such as Netflix and Amazon more money to ensure that their traffic is delivered more quickly than traffic on the “regular” Internet. Wheeler argues that this wouldn’t be discriminatory because while the paying companies would have their traffic sped up, it wouldn’t come at the expense of other websites’ traffic getting slowed down.

In exchange for giving Comcast, Time Warner Cable, Verizon and AT&T something they’ve wanted very badly for a long time, Wheeler says that the FCC will have power to enforce certain rules that will prevent ISPs from blocking or degrading traffic or from “degrading overall service so as to force consumers and content companies to a higher priced tier.”

All of which sounds nice, but this is the kind of genie that really can’t be put back in the bottle once it’s been opened and it gives ISPs’ legal teams way too much room to distort the rules. Allowing ISPs to create Internet “fast lanes” where they can extract tolls in exchange for giving certain big companies faster pipes for their data gives them much more incentive to invest in those faster pipes since they’ll deliver much more value to the ISPs. The “regular lane” of the Internet, meanwhile, is much more likely to suffer from comparative neglect and to constantly fall farther behind the “fast lane.”

By Wheeler’s own rules, this situation would be perfectly fine because ISPs wouldn’t be actively degrading traffic for anyone who doesn’t pay them a toll — rather, they’d just be keeping them at the same speed while putting the big incumbent companies’ speeds into hyperdrive. This would in effect allow for companies to engage in a kind of passive aggressive discrimination that would leave upcoming disruptive startups at a disadvantage if they’re trying to go head-to-head with bigger Internet companies.

The bottom line in this case is that we’re actually better off doing nothing right now than adopting Wheeler’s proposal. Yes, ISPs at the moment are free to block and degrade traffic to their hearts’ content thanks to a court ruling earlier this year that overturned the FCC’s net neutrality rules for wireline ISPs. But at least that discrimination isn’t allowed with the express written consent of the FCC, as similar discrimination would be under Wheeler’s proposal.

As bad as it may seem to just let ISPs do whatever they want, that’s sadly the preferable option for the time being until we get an FCC chairman who is actually interested in preserving the Internet in its current form.