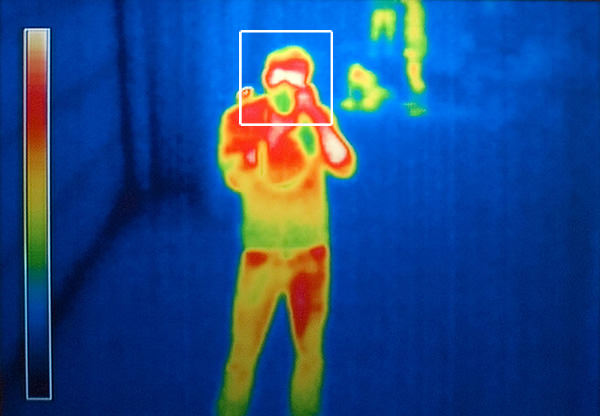 Setting the bar even higher, researchers from Germany have reportedly developed a new technology that allows facial recognition software to identify faces even in the dark. Whereas traditional facial recognition software involves the comparison of two photos, both of which must be taken in well-lit environments, the approach German computer scientists came up with involves using a person’s thermal signature.

Discovery reports on a research paper which was just published earlier this month:

Computer scientists Saquib Sarfraz and Rainer Stiefelhagen from the Karlsruhe Institute of Technology, Germany, created a system that analyzes dozens of infrared images of a person’s face and then compares them to dozens of images taken in daylight.

The comparisons are made with a computer program that works using a so-called deep neural network system designed to imitate the function of a human brain.

In a study published this week, Sarfraz and Stiefelhagen explain how the deep neural network analyzed 4,585 images taken in both infrared and visible light, and was able to establish a match in just 35 milliseconds.

While this may not have any ramifications for consumers, the technology will undoubtedly be of interest to law enforcement officials and government agencies.

Currently, though, the technology still needs a bit of refining. For instance, the report relays how the thermal image a human’s face gives out can fluctuate depending on weather conditions. Even a person just leaving the gym after a strenuous workout will likely give out a slightly altered thermal image than one taken in normal conditions.

Highlighting the work that still needs to be done, the researchers reported an accuracy rate of 80% when comparing a thermal image against a varied number of well-lit images. The accuracy rate dropped to 55% when doing one to one comparisons.

Still, the research marks an interesting and intriguing advancement in the art of face recognition technology. Hit the source link below to check out a more detailed overview from MIT. The published research paper is also available online for your reading enjoyment.