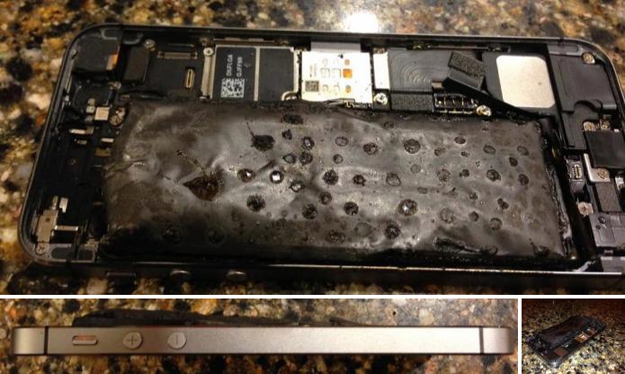 Does Apple have a serious battery issue on its hands? Just a few short weeks after we reported that a middle school student in Maine was forced to stop, drop and roll when her iPhone 5c spontaneously caught fire in her pocket, yet another report of an exploding iPhone has emerged — and this one is accompanied by a number of photos of the scorched Apple smartphone.

This time around, 9to5Mac brings us the story of a person whose iPhone 5s burst into flames for no apparent reason. According to the report, the iPhone wasn’t connected to any unauthorized accessories. In fact, it supposedly wasn’t plugged in at all. The device’s owner says the phone’s battery just began to “inflate” until it finally caught fire.

According to the iPhone 5s owner’s account, he works with computers and was able to act fast to open the device as the battery continued to expand. It still caught fire as he attempted to disconnect it, however, and he says it filled his entire home with smoke.

The battery was starting to “inflate”, it pushed the TOP part of the screen up enough that I was able to grab ahold of it and rip it off from the bottom UP, of course the phone was getting hot at this point because of a malfunction in the battery so I pulled the screen off with quite a good amount of force. Doing so the screws just ripped out of the threads (they are small screws keep in mind..).

As for this, keep in mind, the venting was not some sort of 30 second thing. This went on for about 3 minutes, my home filled with smoke. I work on computers, I did have a phillips screw driver that I was able to take the EMI shields off while it was smoking, because it was too hot to move, So I was trying to disconnect the battery to remove to get it outside (later thinking I realized how this would have done nothing at that point). That is why there is no shielding or cables.

More photos of the scorched iPhone 5s follow below.