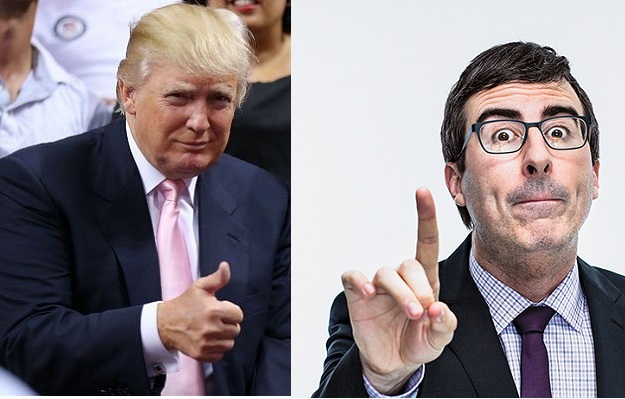 Since leaving The Daily Show, John Oliver has made quite the name for himself on HBO with his series, Last Week Tonight with John Oliver. Recently, the outspoken and witty host appeared on CBS This Morning and explained why he has no interest in having GOP presidential front-runner Donald Trump appear on his show.

“I don’t really care about him in any capacity,” Oliver said. “I don’t really have anything to say to him. He’s said everything he has to say. He has no internal monologue, that man. He’s an open book. That book doesn’t have that many interesting words in it. It’s not like you’re going to find the secret nugget he has been holding back.”

Not one to back down from a public spat, or free publicity, Donald Trump fired back with a claim that he actually turned down an invitation to appear on Oliver’s show.

.@thehill John Oliver had his people call to ask me to be on his very boring and low rated show. I said “NO THANKS” Waste of time & energy!

That’s some classic Trump right there. Only thing that would have made it even Trumpier (trademark pending) would have been if he called Oliver a “lightweight.”

But the story doesn’t end there, folks.

When Oliver and his team got wind of Trump’s claim, they were quick to call BS via the show’s official Twitter account.

A couple of points… 1. Yes, we have a boring show. 2. At no point did we invite Donald Trump to appear on it. https://t.co/qjpg9FLb0V

Now as to why Oliver has no interest in having Trump on the show, he told CBS that a) he’s a comedian, not a journalist and b) that he’s more interested in covering absurd public policies that most people aren’t familiar with.

“There’s a lot of absurd public policies to shine a light on,” said Oliver. “That is generally what we look towards, is things that have not been covered too much but are inherently ridiculous.”