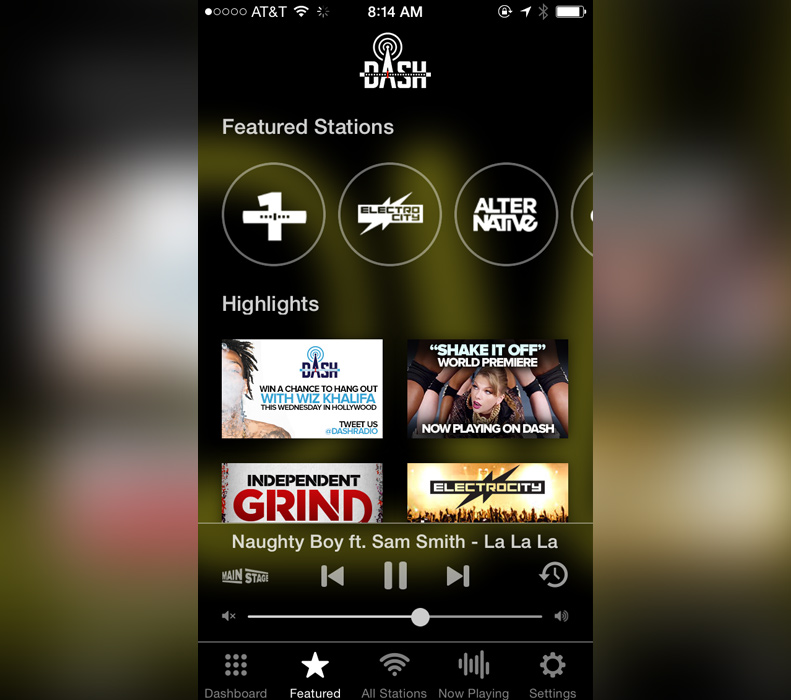 It’s an interesting time for radio in the digital world. On one hand, you have traditional terrestrial radio stations still fighting to stay relevant in the days of Spotify and Pandora by simply simulcasting their existing radio feed in something like iHeartRadio, and you have Sirius XM which is limited to just the United States and has high monthly fees. A new company and service called DASH Radio is aiming to reinvent how we know and listen to the radio, and from what I can see, it’s doing all the right things as it launches both the app and service today.

Starting with 50 stations, DASH Radio is available on iOS, Android and in your web browser. The company tells me that it is aggressively working on expanding the numbers of stations in the coming weeks with more high profile partners and brands. Some of the company’s team and advisors include L.A. Reid, Mike Lazerow, and Matt Michelson among many other individuals with years of experience in the music, radio, and marketing world.

The premise of DASH is reasonably simple, a key point that company CEO and founder Scott “DJ Skee” Keeney told me earlier today when we spoke.

“Radio is one element that hasn’t gone digital yet. People are dissatisfied with it, and we’re trying to bring that magic back,” he stated.

96% of people over 13 years old listened to radio in the last 30 days, and 75% of music is still discovered from traditional radio, so when you think about the fact that there isn’t a truly digital radio network, it’s kind of shocking. The app is free and there are no ads. The service also will allow DASH’s programming team and stations to access in-depth analytics about what people are listening to, how they use the app, and much more than standard radio stations have access to.

DASH Radio’s stations are all 100% original and exclusive to the service, feature on-air personalities, and offer up detailed program guides so you can see what song has played recently, and even the ability to listen to any radio show or program that has ever aired on DASH, for an additional fee. Some of the stations at launch include DJ Skee’s own station called SKEE24/7, East Village Radio, VP Records, and XXL.

The app itself is incredibly well-designed, and resembles both the dashboard of the infotainment screen in your car mixed with something as simple as the dialer in Apple’s phone app — just tap a station to start listening. Nothing bogs you down while navigating, and the UI offers up just what you need to see in an easy manner.

The company plans to generate revenue through title sponsorships of stations, premium on-demand subscriptions with access to radio archives, ticketing, events, and merchandising down the road. The app is available now on Apple’s App Store, should be available later today or tomorrow for Android, and can be listened from a computer at dashradio.com

Los Angeles, CA – August 19, 2014 – Radio is at a turning point. In
the US, 96% of the population over 12 listens to radio, yet statistics
show the overwhelming majority are dissatisfied with the medium. FM
stations feature endless commercials and repetitive playlists, digital
platforms limit discovery with algorithmic playlists that aren’t true
radio, and satellite radio is too expensive for most consumers. Today
a new future unfolds with DASH (www.dashradio.com), a revolutionary
new digital radio platform that features the world’s top DJ’s, zero
commercials, easy navigation, and accessibility from your favorite
devices. The best part – it’s all free!

DASH was created by some of the most influential people in music,
entertainment, technology and media. Led by renowned radio and TV
personality DJ Skee, and including industry titans like L.A. Reid (CEO
Epic Records), Matt Michelsen (CEO & Founder of Backplane), Michael
Lazerow (Salesforce), Adrian Peterson (RB Minnesota Vikings), Peter
Ferraro (East Village Radio), Thuy-An Julien (15 year Apple/iTunes
veteran) and more, this unparalleled team has combined its expertise
to present a game-changing moment in how radio is broadcast and
consumed across the world.

“From my start on radio when I was 16 years old to being on the
biggest station in the country, I have always been passionate about
the magic and opportunities radio can bring. However, I also know and
have witnessed first-hand where it falls short,” says DJ Skee. “It’s a
fact that today’s radio options leave listeners wanting more. With
DASH we are creating a new form of digital radio that brings the most
in variety, style, talent and simplicity, and made accessible to
everyone, everywhere for free.”

“Radio has always been the biggest avenue for music discovery,” says
L.A. Reid. “DASH provides an innovative platform for artists while
offering listeners the variety they want, without limitations.”

Available on all iOS and Android devices with a user-friendly design,
DASH is also accessible on the web, with plans to expand the platform
in future years. With a state-of-the-art backend system efficiently
powered through DASH’s fully automated studio facilities in Hollywood,
a simple-to-use ecosystem, some of the world’s most experienced and
passionate DJ’s, and zero commercials, DASH will become the leading
radio broadcaster for the digital era.