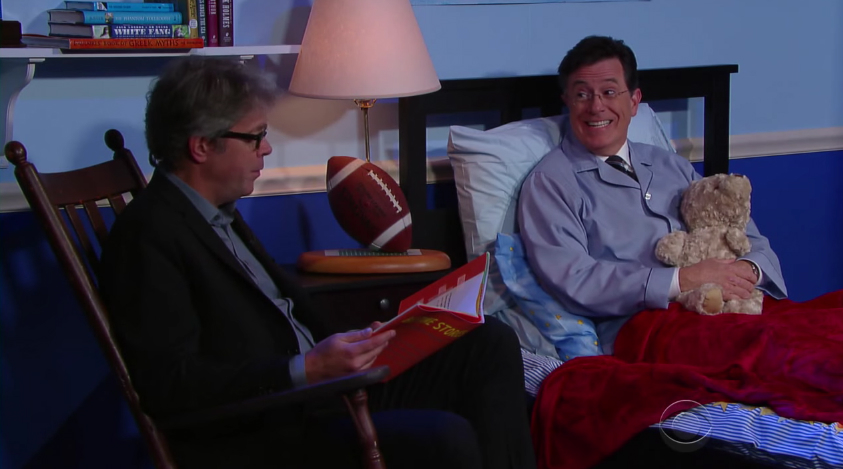 Stephen Colbert had Jonathan Franzen over for a bedtime story. The writer, currently on tour for his novel Purity, told a remarkable story that seems to be about Little Red Riding Hood… but it’s not the kids’ version you expect. Instead, Franzen and Colbert take it to a whole different level.

DON’T MISS: The Nexus 6P can’t really be this easy to bend… can it?

In the story, the big bad wolf has taken over the local independent bookstore of Little Red Reading Hood’s grandmother. Consequently, he has big eyes “the better to see your consumer preferences and target you with advertising,” big ears “to hear your opinions on the products I sell,” big hands “the better to give you free overnight shipping,” and big teeth “to gobble up every retailer in the world.”

We’re not going to spoil the ending for you, but we’ll tell you that the Department of Justice is also involved at some point. It’s pretty clear where Franzen is going with the bedtime story parody since it’s not the first time he’s spoken against Amazon’s CEO Jeff Bezos and Amazon’s book-related business.

“In my own little corner of the world, which is to say American fiction, Jeff Bezos of Amazon may not be the antichrist, but he surely looks like one of the four horsemen,” he wrote in an essay in The Guardian in mid-September 2013. “Amazon wants a world in which books are either self-published or published by Amazon itself, with readers dependent on Amazon reviews in choosing books, and with authors responsible for their own promotion.”

Franzen’s latest book, Purity, is available on Amazon at this link. Colbert’s hilarious segment on the Little Red Reading Hood follows below.