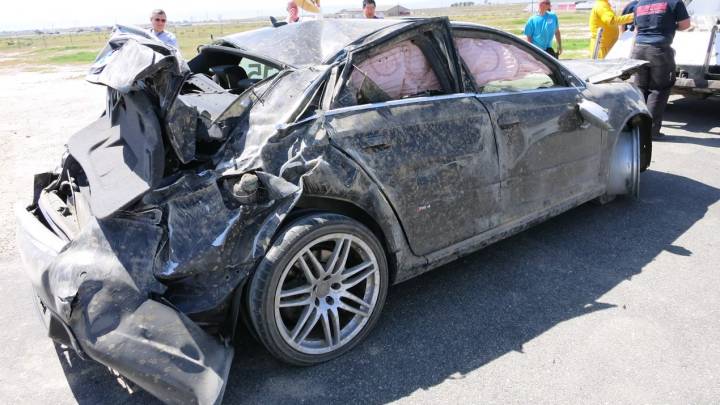 The rise of action cameras from companies like GoPro has flooded the Internet with footage that would have been impossible for most people to capture just a few short years ago. Thanks to popular cameras like the GoPro HERO4, the world can enjoy first-person video as if each viewer was him or herself.

A BGR reader just emailed us a link to this video, and we have already rewatched it half a dozen times. The footage comes from an open track session at Willow Springs Raceway in California back in March, and it was filmed by a GoPro HERO4 attached to the windshield of driver Tim Bucklin’s Audi RS 4. Things seem to be going well enough… until disaster strikes.

In this case, I turned in too early and too sharply. It was early in the day and early in the session, so I wasn’t up to full speed and felt I had enough track to recover. The car tracked out and I maintained the steering angle I normally would for track out, pointing me down the track toward the right side to set up for T1.

Though, in this case, the angle was too steep and the grip too low, so the car tracked out a foot too wide. I know the protocol is to just go straight off with two feet in, and in hindsight I should have done that. However, in the moment, it wasn’t apparent the car was going to go wide until the very last instant, leaving me no chance.

The video gives us a first-person view of this car-totaling accident, and the disaster repeats several times in slow motion. You’ll find the whole thing embedded below.