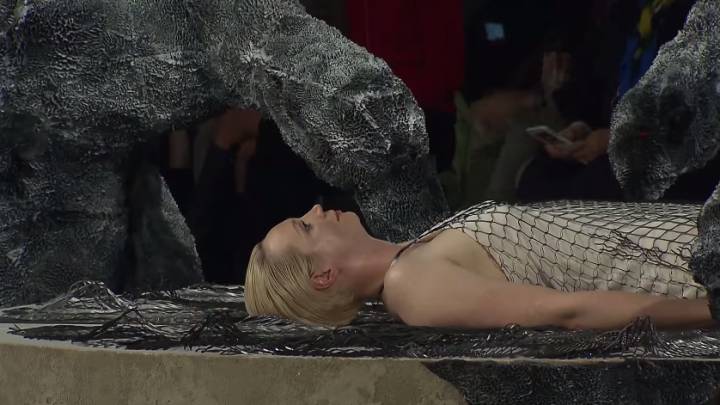 Say you’re Brienne of Tarth and you’ve just run out of armor. Would you trust scary 3D printing machines to weave a dress around you while you’re laying completely still on a giant table? Wait… that’s a silly scenario. Brienne of Tarth would never have access to 3D printers. OK, so what if you’re fashion designer Iris van Herpen looking to impress the audience by creating a 3D printed mesh dress while models are wearing your latest creations on the catwalk; would you hire actress Gwendoline Christie, who plays Brienne in Game of Thrones, to sit still on that workbench?

As you’ll see in the video at the end of the post, that’s exactly what van Herpen did for her Quaquaversal show. The video is rather long, at over 11 minutes, but you can spot Christie surrounded by three 3D printing robots doing their thing. The action is even clearer after the nine-minute mark if you’re impatient.

“Gwendoline Christie lies in a deep-time dream, wearing a circular dress which is being woven upon her,” van Herpen’s website reads. “The live process blends different techniques — laser cutting, hand weaving and 3D printing into one dress, which spreads from the centre, quaquaversal [or extending in all directions from a central point] in its geometries.”

Check out this amazing new 3D printing feat in the following clip.