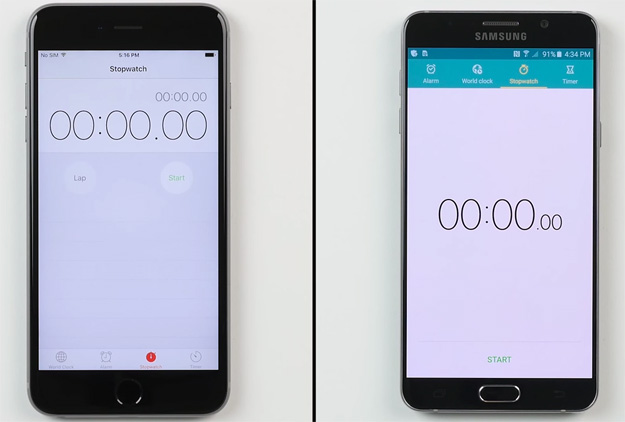 Enthusiastic Android fans have historically relied pretty heavily on benchmark test scores when making the case against Apple’s iPhone lineup. This “fight” is ridiculous to begin with, of course, but relying on benchmark scores that don’t even represent real world performance is even sillier. Of course, many of these fanboys came around to agree with that line of thinking on benchmarks once iPhones started to crush the competition in benchmark performance tests, beginning with the iPhone 5s and continuing right up to this year’s iPhone 6s.

Performance tests that measure real world use might be considered a better gauge than tests that measure things like processor performance, and one recent test pitted the new iPhone 6s Plus against the king of Android phablets, Samsung’s Galaxy Note 5, in what could be a relatively accurate depiction of how these phones perform in the real world.

YouTube user “PhoneBuff” has created a number of smartphone performance test videos in the past, and they’re set up as races. Two phones are pitted against each other as the narrator opens and closes a series of apps to see which phone can complete the tasks at hand more quickly.

Now, it’s important to note that this test is in no way scientific. There are plenty of variables, not the least of which is human error; these are also two completely different platforms and the test uses some third-party apps, so there’s no telling if each version is optimized or even coded well at all. But if one is looking to measure real world performance, these issues are a key part of the user experience.

So, how did these two phablets fare in the tests?

The narrator performed two “laps” in this test. First, he opened a series of apps one after another and timed how long it took from start to finish. After each app opened, he reduced it to the background and moved on to the next app. After the whole series of apps had been opened, started and closed, he did a second lap.

PhoneBuff’s first lap couldn’t have been closer, with both phones clocking in within 2 seconds of each other. The second lap, however, wasn’t even close. Both handsets have ample RAM, but only one actually keeps apps open and frozen in the background, which has a huge impact on multitasking — this, of course, is extremely important for real world usage.

Which phone was the winner? You’ll have to watch the video embedded below to find out; the actual test begins at 0:28.