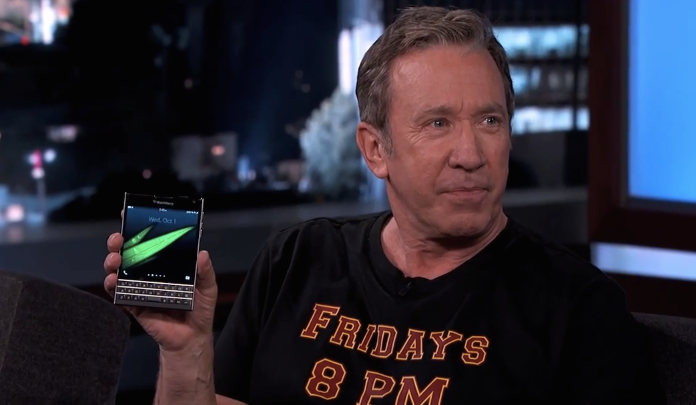 BlackBerry would never do anything gimmicky like pay U2 to play at its flagship phone launch… well, OK, it did sort of appoint Alicia Keys to be its creative director that one time and it did have Wayne Gretzky introduce the Passport, but those two things were totally different because there’s always something pure about what they do! The point is, BlackBerry has never really been about getting celebrity endorsements for its products, although we can’t imagine it will turn them down if they just happen to come along.

RELATED: BlackBerry fanboy rips everyone for being too stupid to understand the Passport’s greatness

With this in mind, we thought we’d share a video of former Home Improvement star Tim Allen giving the new BlackBerry Passport a high-profile endorsement on Jimmy Kimmel’s show on Wednesday night.

During his Kimmel appearance, Allen said that he liked the Passport in part because he likes “weird stuff.” Kimmel also asked Allen whether it was tough to fit such a large device with pointy corners in his front pocket and Allen responded that it helped to have “a big ass” so you could slide it into your back pants pocket. Allen also said that he liked the phone’s big square display and said that the whole thing was “just neat.”