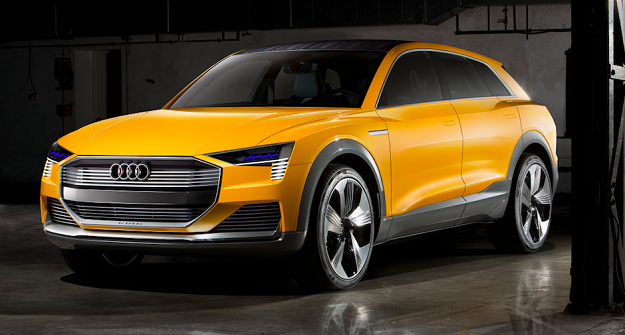 The North American International Auto Show in Detroit may not have the Tesla Model 3 as we were initially promised, but that’s not to say that there aren’t a number of interesting new cars and out-there concepts worth highlighting.

Earlier today, for example, we brought your attention to the Buick Avista, a concept car that looks like it might otherwise come from Tesla or Porsche. Also getting in on the action was Audi, who earlier today rolled out the Audi h-tron Quattro, a stout SUV with quite a few tricks up its sleeve.

Audi’s new concept car runs on hydrogen (yes, hydrogen) and has an impressive range of 372 miles. Speed wise, the h-tron Quattro isn’t exactly blazing fast, but it can get up to a top speed of 124 mph and can hit 0-to-60 in a hair under seven seconds.

Here it uses a 110 kW hydrogen fuel cell in conjunction with a 100 kW lithium ion battery pack to power a 140kW motor in the back and a 90 kW motor up front. Together, the motors promise to get the gorgeous SUV to 60 in seven seconds.

From a design perspective, the car looks pretty sleek for an SUV and boasts a pretty high-tech and spacious interior to boot. The h-tron Quattro even borrows the flush door handle design first popularized on the Tesla Model S.

Seeing as this is a concept car, there are a few interesting details we should also mention. Because the car runs on hydrogen, the refuel time is a jaw-dropping 4-minutes. In contrast, even Tesla’s superchargers need 30 minutes of charge time to get 170 miles of additional range.

A video showing close-ups of both the car’s exterior and interior can be seen below.

High-end options such as the Audi virtual cockpit and the MMI navigation plus with the new MMI operating concept underline the level of comfort and convenience offered by the new Audi A4 allroad quattro. The diverse Audi connect services link the driver and passengers with the Internet via the high-speed LTE standard. There is also a comprehensive range of driver assistance systems. Particular highlights include the predictive efficiency assistant, adaptive cruise control Stop&Go including traffic jam assist and trailer assist that makes it easier to maneuver the outfit.

High range, swift refueling, sporty road performance: The technology study Audi h-tron quattro concept demonstrates the huge potential of fuel cell technology. This model, which Audi is unveiling for the first time, has all-electric drive – using hydrogen as its energy source. It combines state-of-the-art fuel cell technology delivering up to 110 kW with a battery that provides a temporary boost of up to 100 kW.

Two electric motors on the front and rear axles represent a new evolutionary level of quattro drive – the electrified quattro. The electric motor on the front axle develops 90 kW, and its rear counterpart 140 kW. The sporty SUV accelerates from 0 to 100 km/h (0 to 62.1 mph) in under seven seconds. Its hydrogen tanks can be refueled safely and easily in around four minutes; a range of up to 600 kilometers (372.8 mi) is possible.

The Audi h-tron quattro concept also provides a foretaste of the technologies for piloted driving and parking that will go into production in 2017 with the next generation of the Audi A8 full-size sedan. Piloted driving at Audi revolves around the central driver assistance controller (zFAS). It computes a model of the car’s surroundings in real time and makes this information available to the assistance systems and the piloted driving and parking systems. The latter can assume driving tasks during parking or in stop-and-go traffic on freeways at speeds of up to 60 km/h (37.3 mph).

All in all, an intriguing concept.