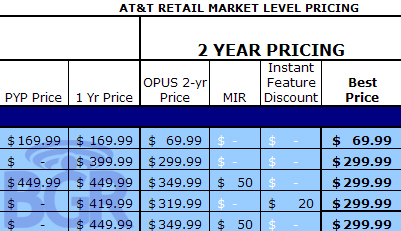 We know the RAZR 2 launched today, but what’s more comforting than knowing that the Motorola Q9, UTStarcom 5700, BlackBerry 8820, and Pantech C810 (it says C180 in the price sheet, though) should be launching this month! Well, theorectically next month. What gadget lover wouldn’t be super stoked? It seems as if the Pantech C810 could indeed make it way to stores in late September, but this price sheet is only valid through September 15, so they better get to crankin’ these out!! Pricing should be as follows:

$299 seems to be the magic number with AT&T, and you can expect the BlackBerry 8820 to launch with that 2 year pricing as well. Whether you’ll be able to GPS ’till your hearts content, well, that’s a whole ‘nother story.

UPDATE: Sorry, we forgot to add this in…We’ve been told the HTC TyTN II, or AT&T 8925 should be launching October 1st on AT&T. Hopefully that will stick.