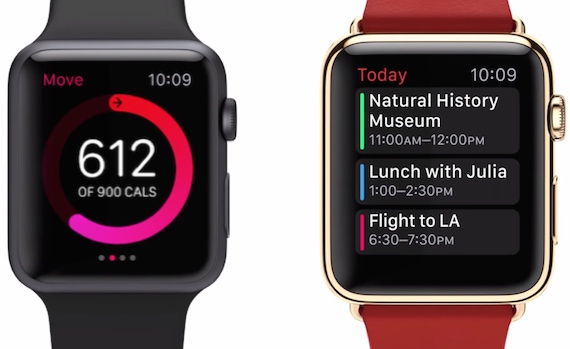 As the Apple Watch launch draws closer, we can expect to see an onslaught of Apple’s marketing muscle in full effect. From TV spots — which have already started airing — to extensive print ads, it’s only a matter of time before we’re drowning in a sea of Apple Watch advertising.

Thus far, Apple’s Apple Watch advertising has been somewhat measured, comprised of just a few magazine ads here and there. Interestingly, though, most of the Apple Watch ads we’ve seen so far have been decidedly geared towards women.

Don’t Miss: Apple will launch its attack against pay TV companies this fall

For instance, the first Apple Watch marketing push took place this past November when model Liu Wen appeared on the front of Vogue China sporting the expensive Edition model Apple Watch. A few months later, the Apple Watch scored its second magazine cover when supermodel Candice Swanepoel donned the wearable for the March cover of SELF magazine.

Shortly thereafter, word got out that Apple planned to run an expansive 12-page Apple Watch photo spread in the March issue of the U.S.-based Vogue.

So is there a method to Apple’s madness? Is there a reason we haven’t seen similar marketing pushes in men’s magazines or in otherwise gender-neutral publications like TIME ?

Now Apple is no marketing novice and it certainly stands to reason that they know exactly what they’re doing.

To that end, A Blog To Watch a few weeks ago delved into this exact topic, positing that marketing the Apple Watch to women will be a key strategic marketing objective for Apple.

While the Apple Watch debut in September 2014 (and subsequent announcements) have been designed to get the gadget and tech community speculating about the mid-2015 Apple Watch release, Apple has, at the same time, been focusing considerable elements on the fashion industry. It is also important to note that the luxury watch industry has been focusing on marketing toward the fashion industry for almost a decade now, and for the last two years, that focus has been heavily on women. The luxury watch industry hopes that for 2015 and beyond, women, as well as men, will be major growth areas of luxury watch consumption. It is interesting that both Apple (the luxury smartwatch maker) and the traditional high-end watch industry are focusing on women almost at the same time.

Indeed, the tech press is already laser focused on the Apple Watch. It’s a new Apple product after all, in an entirely new product category no less. The Apple Watch will inherently attract immense attention from the geek crowd. But by positioning the device as a luxury fashion item that warrants advertisements in fashion magazines, Apple is cleverly broadening its appeal beyond, say, the type of users who would purchase a Pebble.

Female consumer acceptance of the Apple Watch is extremely important for the smartwatch industry who, until now, has mostly male buyers. Smartwatch companies have, for the most part, failed to convince women that smartwatches are useful, sexy, trendy, and aspirational. If anyone can remove the “geek element” from a connected wearable communications device, it is Apple, and they know it needs to be done right off-the-bat if the Apple Watch is going to be perceived as an object of desire for women.

Because of this strategy, Adams intimates that Apple is best positioned to win the burgeoning smartwatch battle. In contrast, take a look at the Moto 360; all of its available models and bands seem geared towards men exclusively. For the Apple Watch to truly be a runaway hit, it needs to have broad of an appeal as an iPhone or an iPod. Through this lens, Apple’s early strategy of presenting the Apple Watch in more traditionally woman-oriented publications makes sense.

A close look at Apple’s larger marketing efforts surrounding the Apple Watch reveals a rather brilliant plan when the various arms of its approach are put together. Apple has connected the Apple Watch with the traditional world of horology to garner acceptance among watch lovers. Apple has obviously secured favor with the tech and electronics industry by mere virtue of being a new Apple product, and Apple has focused directly on the world of fashion to help people realize it is a product that does not clash with (but rather is meant to enhance) a modern lifestyle.”

Looking ahead, it’ll be extremely interesting to keep tabs on how and where Apple continues to roll out its Apple Watch marketing campaign. While marketing for the iPhone and the iPad has become a tad predictable in recent years, the Apple Watch, as a completely different type of product, will require specialized attention and a more unique approach.

There’s a whole lot more to digest in Adams’ full piece, which is well worth reading in its entirety.