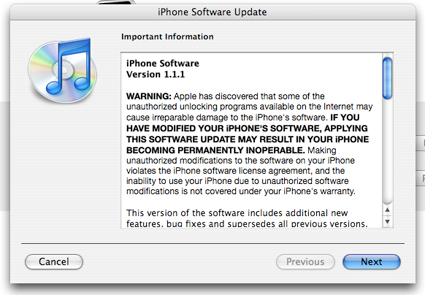 Yes yes, friends. The day has finally arrived. Apple dropped a new iPhone firmware revision, bringing the official software notation up to version 1.1.1. This new software brings a host of changes and upgrades. Here’s a rundown of some of the more significant changes:

Apple elegantly states they have “discovered that some of the unauthorized unlocking programs available on the Internet may cause irreparable damage to the iPhone’s software. If you have modified your iPhone’s software, applying this software update may result in your iPhone becoming permanetly inoperable” For now, if you’ve “modified” your iPhone, we suggest you wait and see what the word is before updating. Although, the new features look oh-so-good! If you do decide to hit the update, let us know what happens!

Thanks, to everyone that sent this in!

UPDATE 2: Trying to jailbreak with Independance forced me to restore my iPhone…ugh!