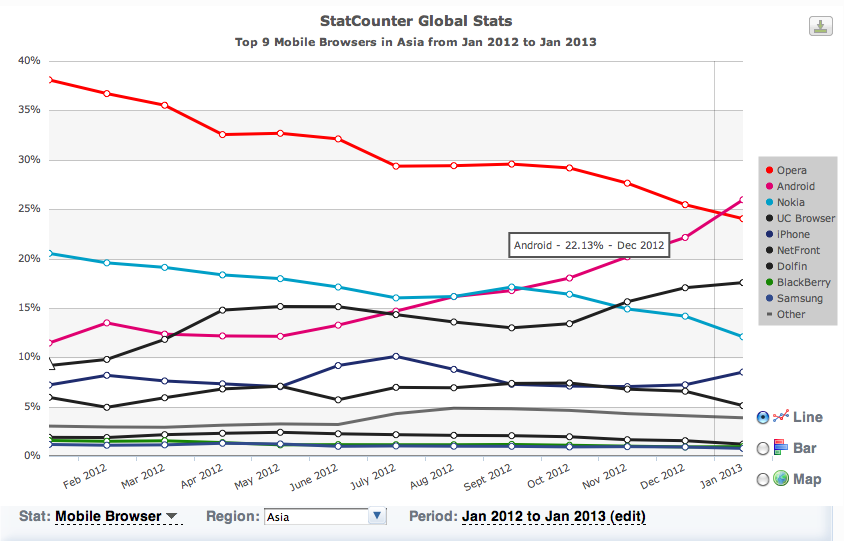 This week, StatCounter declared that Apple (AAPL) had finally become the biggest smartphone brand in the world when it comes to mobile browsing volume, TechCrunch reported. The StatCounter analysis of the mobile browsing market is based on 3 million webpages and is often regarded as the leading barometer of its sort. What makes the January statistics interesting is not Apple’s ascent to number one vehicle for mobile browsing; this was inevitable. What is weird is how different January was from previous months: It seems that after the Christmas period, there was a marked change in consumer behavior in two key regions.

In Asia, the iPhone’s browser share suddenly jumped from 7.2% to 8.5% after several months of declines or tiny increases. Android showed a nearly three point surge. Strangely, Nokia’s (NOK) share tumbled by more than two percentage points between December and January. This is the steepest decline in the past twelve months and it may bode ill for the Asha renaissance Nokia enjoyed in Asia during the summer and fall of 2012.

In North America, the iPhone browsing share also jumped suddenly in January. Oddly, Android’s share dropped despite the steep discounting of several Android models during the post-Christmas period. Yet in Europe and Latin America the mobile browsing share trends continued through January without any major changes. Is it possible that there were iPhone shortages in North America and Asia that were alleviated during January?

Nokia’s sudden decline in Asia is even more intriguing. Nokia’s fourth quarter 2012 report clearly showed major problems in China continuing, while the South-East Asian performance was decent, probably buoyed by the new Asha models that emulate smartphones. Looking at the StatCounter numbers for Asia, it is easy to see how the Asha models had a big positive impact on Nokia in the summer of 2012, when they arrived en masse to India. Starting in July 2012, Nokia’s mobile browser market share in Asia stabilized after a long tumble and then actually ticked up in August and September. This dovetails well with the feature phone volume surprises Nokia delivered in South-East Asia in the second and third quarters of 2012.

But after the encouraging summer and autumn, Nokia’s browsing market share in Asia has now started tumbling even faster than before the Asha 200 and Asha 300 ranges shored up the feature phone business. Could it be that the positive impact of those models was short-lived and the new wave of cheap Android smartphones have started undercutting the Asha appeal in Asia?[bgr-post-bug]