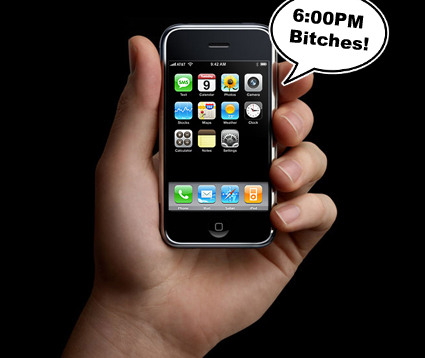 Have you been sitting at home alone, trying to figure out what the heck is going to happen June 29th? Should you camp out in the store and then hijack the FedEx delivery guy? Probably not. But we do have some exciting bits of information surrounding the day the iPhone will be released. All AT&T stores will be closing at around 4:30PM on the 29th. Everybody will be kicked out of the store, which will then reopen at 6PM for the sale of the Apple iPhone. In addition to closing at 4:30PM, AT&T stores will be staying open late. We’ve heard up until 12AM. So now you know your attack plan, but what exactly are they doing when they rush us out the door at 4:30PM? Well, they’re expecting the iPhone shipments to hit stores around 4-6PM that day. Make no mistake about it, this was Apple’s genius shipping plan, to make sure devices were not sold early before the release date. Remember the Apple iPhone display from a little while back? That will also be setup in the 4:30PM-6:00PM time frame. Ok, we know when it’s coming, how late the stores are open till, but what else? Well, besides the iPhone, expect a number of accessories to be available at launch. Some of these should include a car charger, extra wall charger, carrying case, and possibly even Apple’s Bluetooth headset. Good luck.