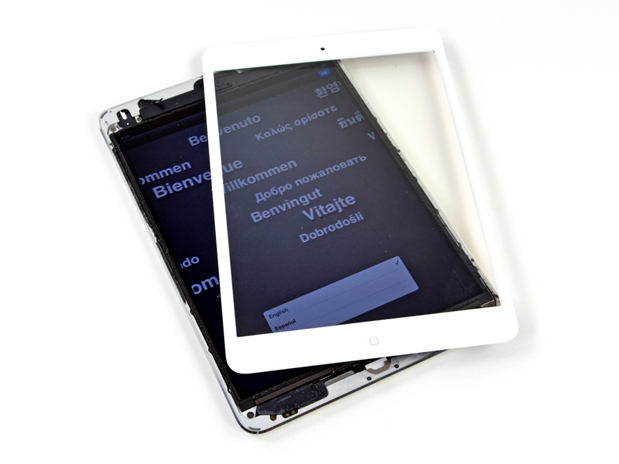 Another day, another teardown. The iFixit team wasted no time procuring an iPad mini and quickly opened it up for a gander. The teardown reveals that Apple’s (AAPL) latest tablet has a glass screen that’s much easier to remove than previous iOS devices and much friendlier than the iPhone 5’s in-cell display that bonds the glass to the touch sensor. There’s a shrunken 32nm A5 processor and 512MB of RAM, as was expected since the device mostly features miniaturized iPad 2 internals. The iPad mini’s battery has also been confirmed to be a 3.72 V, 16.5 Whr, 4400 mAh battery, while the LCD display was produced by Samsung (005930).

True to the tablet’s name, iFixit says the screws inside of the tablet are tiny as well. Finally, thanks to the smaller Lightning connector, Apple was able to squeeze in a stereo speaker inside of the iPad mini. Overall, iFixit gives the iPad mini a repair score of 2/10 (10 being the easiest to repair), the same as the third-generation iPad. To see more images of the iPad mini under the knife, be sure to visit iFixit’s site.