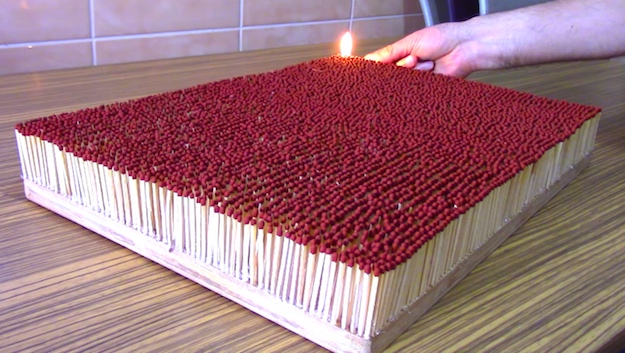 Lining up and then knocking down upwards of 6,000 dominos is certainly interesting, but we’ll do you one better. Recently, the HTD YouTube channel thought it’d be a good idea to line up 6,000 matches in close proximity, light a lone match, and then record what happens next.

Suffice it to say, the end result is rather mesmerizing. All told, the entire arrangement of matches takes about 30 seconds before the entire match-holding contraption is engulfed in flames. After about 14 minutes, the fire dies out on its own.

DON’T MISS: Get $149 worth of photo editing tools free from Google right now

You can check out the full video below if you’re looking for some quirky weekend excitement. Of course, it should go without saying that you don’t want to try this at home. At the time of this writing, the video has already been viewed more than 12.4 million times.

Interestingly enough, upon perusing the HTD YouTube page, it seems that these folks have a thing for fire and bizarre contraptions filled with thousands of matches. Just yesterday, they uploaded a new video highlighting a 7,000 match chain reaction wherein the matches are assembled like a layered cake. You can check that one out below.